One Bathurst and six podiums for Dave Sieders

One Bathurst and six podiums for Dave Sieders 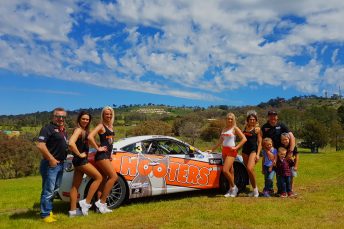 The 32 year old from Western Sydney recorded two thirds and a second placing in both his MangoCredit V8 Ute and his Hooters Australia Toyota 86 Series on the iconic race track.

“What an awesome weekend,” said Sieders, “getting on the podium at any time is always a great result, to do it in every session in both categories is even better, but to do it all at Bathurst just tops it off”.

“The only way it could have been better would have to have been on the top step of those podiums, and we definitely had a [Ute] that was capable of getting the wins, but I’m far from disappointed with six podiums in three days.”

The first races for both Series saw first lap safety cars, finishing in third, where he started, in the V8 Ute on Friday afternoon, and after leading the field into turn one in the Toyota on Saturday morning, Sieders crossed the line in third position after a power issue gifted passes up the mountain to Aaron Seton and Will Brown.

“It’s every driver’s dream to race here at Bathurst, but it’s so easy for it to go bad, so it’s never a surprise to see the Safety Car come out,” said Sieders, “thankfully we were still able to get a few green laps in at the end of each race”.

At the conclusion of the first Toyota race, Sieders faced possibly his biggest challenge of the weekend, as he had to proceed straight to the marshalling area to jump into the V8 Ute for a top 10 reverse grid race.

Quickly moving into fourth position on the first lap, from eighth on the grid, Sieders had three laps behind teammate Aaron Borg, before a three lap hunt of over two seconds to eventual race winner Kim Jane, with a door-to-door battle down the fastest straight and corner in Australia on the final lap.

“There were definitely a few times I had to remind myself that I’m leading a Championship,” said Sieders, “‘Kimbo’ had a poor run onto Conrod Straight at the end, so I thought I’d have to have a go.

But he’s never going to give in easy, and I decided not to try anything too stupid into The Chase and just hold on for second”.

Starting on the outside of the front row for the second Toyota race (after Aaron Seton was penalised in race one for an improper restart), but still suffering power issues, Sieders found himself in a race-long battle with invited driver Steven Johnson and finished fourth on track, later promoted to third after Cameron Hill was penalised for passing under yellows.

“Coming into the final sector of the race, I got a run on Johnson down Conrod and passed him just before The Chase, which was under yellows right through to the bridge,” said Sieders, “coming down into Murray’s Corner we were side-by-side and I just pipped him on the line by five-hundredths of a second”.

Finishing Saturday in the Ute for its third and final race, Sieders entered the race equal second on points and starting from position three based upon qualifying results.

“The issues with brakes in qualifying probably cost us a win in race three, as we started in third instead of the front row because of our head-to-head in qualifying against Nathan [Pretty],” said Sieders, “Harris got a poorer start and I got a little balked instead of being able to run away like Nathan did”.

Running in third place on lap three and with a car stopped at the exit of turn two, Sieders was caught on the outside of the track and passed by three cars under yellow conditions. After dropping as far back as seventh by the end of the lap, Sieders raced back to cross the line in fourth, later promoted to third with penalties applying to Barbera and Hansford for their passes at turn two.

“I’d had the radio call that there was a car on the outside of the exit of turn two, and with Harris on my inside heading into the corner I was slower than normal trying to get off the wall to avoid the car, which slowed me a little, and three others went down my inside, with one of them redressing,” said Sieders.

Starting the day of the Bathurst 1000, the Toyota’s hit the track for their final race, with Sieders having no significant issues to finish in third, with teammate Tim Brook right behind, as the top five finished within one second of each other.

“Sunday morning at Bathurst is definitely the one race you really want to win,” said Sieders, “the front four managed to pull away from the field, and it was another good battle with Johnson in front, and Tim pushing hard behind”.

Sieders leaves Bathurst extending his Championship lead in the V8 Utes, which will be back in action in two weeks on the Gold Coast, and holds second place in the Toyota 86 Series, which has one round to run at Homebush in December.

“It’s been an awesome weekend, but we’re all eyes forward as we head to the Gold Coast in less than two weeks to try to keep our Championship going in the Utes, before finishing the year at Homebush with double duties again.”