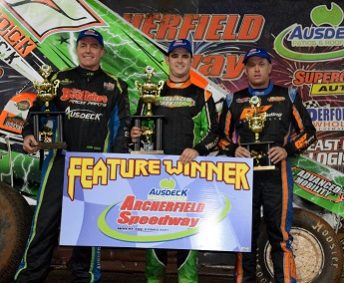 In another of the barnstorming performances for which he has become synonymous, Luke Oldfield scorched to his tenth feature race for the season when he chased down Andrew Scheuerle to win round 15 of the East Coast Logistics Sprintcar Track Championship at Ausdeck Patios Archerfield Speedway on Saturday night (April 29). Scheuerle looked a certain winner for a considerable portion of the race until a deflating tyre made its presence felt and left him with no answer to Oldfield’s challenge. In his best result of the season, Brent Kratzmann snared third spot ahead of Pater Lack, Cody Maroske and David Whell, with Dan Murray, Brad Ayers, Allan Woods and Mark Pholi completing the top ten.

The Danny Davidson Memorial feature race for Midgets saw Troy Ware lead every lap to take the win ahead of Brock Dean, who saw off the best efforts of Rusty Whittaker to secure second spot. Darren Vine filled fourth ahead of Brendan Palmer and Michael Harders with Scott Doyle bouncing back from a heat race rollover to secure seventh.

Despite starting deep in the field, Scheurele stormed through the field in the opening heat to finish second behind Brett Minett, with Pholi home in third spot.

The second heat saw Woods prevail over Mitch Gowland and Ayers, with Kratzmann keeping Davd Murcott at bay for fourth in what would be the two-time national champs’ final fling for the night, retiring from his next heat and subsequently failing to start the feature.

Heat three went to Whell in advance of Andrew Corbet and Hilder before Oldfield demolished the field in heat four, surging from position row three to finish more than six seconds clear of Andrew Marks, with Dan Murray third.

Titman triumphed in heat five from Liebke and Kristy Bonsey, with Pholi wrapping up the preliminaries with a win over Mick Sauer and Lack in the final heat.

The Lucas Oils Dash saw Scheuerle hold onto the top spot when selected pole position for the 6-lapper and promptly led throughout to defeat Titman, Kratzmann, Walker, Oldfield, Whell and Hilder, with Lack riding the turn four wall and tipping over with two laps to run.

The East Coast Logistics B Main saw Pholi lead the field home, with Sauer, Bonsey and Woods also making the transfer into the feature event.

The feature race only got as far as turn one at the first attempt before Titman found himself upside down, advancing Walker to the outside front row for the restart. It was Scheuerle though who would lead the field away at the next attempt, with walker slotting into second ahead Kratzmann and Oldfield, with another interruption coming on lap three when Minett tipped over in turn three. Scheuerle led away again and just as Walker looked on target to secure his first podium result, he tagged the wall in turn four to bring his challenge to an end. Having already moved ahead of Kratzmann, Walker’s demise moved Oldfield into second spot and he wasted little time in rounding up Scheuerle, slipping underneath as they negotiated lapped traffic. Once in front, Oldfield cleared away to finish more than six second ahead as Scheuerle soldiered on to salvage second ahead of Kratzmann. Fourth was a fine result for Lack given his Dash dramas, while Maroske made good ground to finagle fifth ahead of Whell, Murray, with Ayers the last runner on the lead lap. Woods, Pholi, Bonsey, Hilder, Brodie Tulloch, Andrew Marks and Mick Sauer were the remaining finishers.

Midget heats wins were shared between Ware, Vine, Whittaker and Dean, but it was Ware who proved unstoppable in the 20-lap Polar Ice Danny Davidson Memorial. Whilst Ware was in control out front, the battle for the minor placings was frantic as Whitaker, Vine and Palmer swapped spots in their pursuit of second-placed Dean. Running third after four laps, Whitaker had dropped back to fifth after nine circulations before moving forward again to break clear of the battle pack and reel in Dean. On lap 15, Whittaker advanced to second, only for Dean to reclaim the position with two laps to run. Vine and Palmer, both of whom had podium spots in their grasp at some stage before succumbing to Whittaker’s challenge, filled the top five ahead of Harders, Doyle and Dallas Sharp. In a depleted field, Rob Stewart, Gavin McDowell and Tony Eickenlkoff completed the finishers, while Charlie Brown’s run of outs continued when he spluttered infield just when a top five finish was looking a real possibility.

Following her runner-up finish in Sydney last weekend, Kristin Brown outgunned the strongest field so far this season to win the KRE Formula 500 feature race. Having qualified on pole position, Brown was never headed throughout and led Ryan Skennar and James Kennedy to chequer. Tristan Johnson filled fourth after succumbing to Kennedy late in the race, while Kaydon Iverson, Jock Goodyer and Ryan McNamara were next in line. Making an instant impact in his elevation from the Junior ranks, Nick Hodges finished eighth ahead of Piper Ogilvie and Cameron Bertuch. Australian champ Liam Williams had moved to second after starting third until a clash with a lapped car on lap five ended his charge.

Brown, Iverson, Williams and Nathan Pronger, who also made an early exit from the feature, shared the spoils in the heat with a win apiece.

All four races produced different winners in the Junior Formula 500 events and it was Boyd Chaffey, Dekota Gayy, Nicholas Whell and Brode Davis who emerged with wins.

In the final round of the Shock Absorber Therapy AMCA Nationals Track Championship, Steve Price proved too strong in the feature, downing Steve Potts in an impressive performance. Price and Potts also won heats, as did Russ Hardy, who finished third in the feature. Peter Markulin, Michael Mason and Nathan Jones were next best, followed by Anthony Joyce, Damien Groer and Nick Storey.

Next Saturday night at Ausdeck Patios Archerfield Speedway (May 6) will feature Super Sedans and Dirt Modifieds, plus Compact Speedcars and Modlites. The final two rounds of the East Coast Logistics Sprintcar Track Championship will be held on May 13 and May 27.