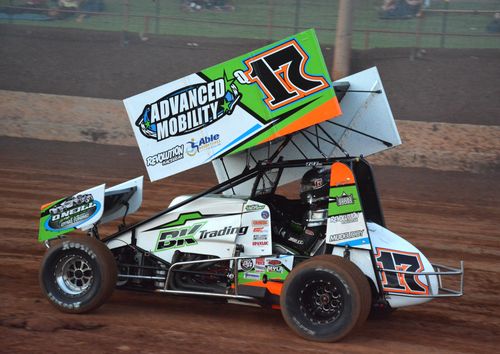 Luke Oldfield affirmed his status as Queensland’s premier Sprintcar pilot when he raced to his second state championship victory at Archerfield Speedway on Saturday night (May 28). Having advanced from fourth to assume the race lead after just eight laps of action, Oldfield was faultless out front on a challenging track and would face little resistance in his charge to the championship, finishing ahead of Brock Hallett, Taylor Prosser, Jock Goodyer and Randy Morgan.

In a brutal 50-lap Midget feature race, Kiwi gun Kaleb Currie soared while so many others floundered, climbing from row five to take over the front running on lap 24 before withstanding the best efforts of Rusty Whittaker to secure victory. Behind Whittaker came NSW champ Michael Stewart, with Matt Geering and Mitch Brien completing the top five in a race of high attrition.

A stout field of 35 cars fronted for the penultimate Sprintcar event of the season, although only 34 would hit the track for time trial qualifying with a broken axle upending Aaron Kelly during hot laps and rendering him a spectator. As the first runner against the clock, Mitch Gowland was able to remain atop the time sheets through a few subsequent runners before being usurped by Randy Morgan (12.424), who was quickly relegated by Kevin Titman (12.102). Running late in the order, Oldfield would be the only driver to drop under 12 seconds, stopping the clock at 11.875 to secure Fast Time and maximum points, with Jy Corbet (12.011) pushing Titman back to third. Prosser (12.245), Nicholas Whell (12.263) and Goodyer (12.289) were next best ahead of Morgan, with Bryan Mann, Adam Butler and Hallett rounding out the top ten.

The opening heat race went without incident and resulted in a win for Anthony Lambert in advance of Kevin Britten and Kristy Bonsey.

Brent Kratzmann pounced from pole position to head the field throughout heat two, leading home Gowland and Darren Jensen, although Corbet stole the attention away from the leaders with a charge from eighth to second that ultimately came to nothing when he expired in turn one with two laps remaining.

Heat three went to Richard Morgan over Andrew Baumber and Titman, who started at the back of the 12-car field.

There was action aplenty in heat four, the first moment materialising on the opening lap when Lambert and Mark Pholi tangled in turn two. The restart failed to get beyond another lap before contact between Brad Keiler and Jason King halted resulted in both cars being carted to the infield and putting King out of action for the rest of the night. Kratzmann replicated his earlier result to win again, this time ahead of Hallett and Tim Farrell.

Adam Butler became the next to make an early exit from the championship, heading infield prior to the start of heat five with a power steering issue and never to be seen again, After a barnstorming start that saw him sweep from sixth to second on the opening lap, Corbet would take a few more laps before relegating Brad Ayers from the lead. Ayers remained second at the fall of the chequer, with Richard Morgan third on this occasion.

The final heat of the night fell in favour of Andrew Baumber over Karl Hoffmans and Michael Saller.

Jensen led most of the B Main before succumbing to Farrell’s advances on lap 12, with Brad Ayers and Mark Pholi also earning a place in the big show.

The Pole Shootout started in bizarre fashion when Whell somehow tipped over in turn two during the warm-up laps, leaving him to start eighth in the feature race. Goodyer and Hallett progressed from the opening round, with the latter joined by Prosser in advancing to the Gold shootout. With a problem forcing Oldfield to the infield, Hallett would take maximum advantage to secure pole position for the feature. With Titman second quickest and thereby starting alongside Hallett in the title decider, Prosser would find himself sharing row three with Oldfield.

It was Titman who got the best of the start to lead the feature away, with Oldfield quickly slotting into second spot ahead of Hallett, Prosser and Randy Morgan. The order at the front was unchanged when a spin from Corbet in turn two brought about the first restart. It was just a lap into the resumption when Oldfield slipped into the lead, with proceedings halted again on lap 10 courtesy of a kerfuffle in turn four that resulted in a spin, and subsequent retirement, from Jensen. Along the back straight on lap 18, Titman miscued in his attempt to clear the lapped car of Pholi and the resultant contact ended his challenge, elevating Hallett into second ahead of Prosser, with Goodyer now lurking in fourth. With 12 laps to run, Goodyer surged into third spot, only for Prosser to regain the position on the next lap before Corbet, who had stormed back to sixth from the rear of the field, exited the contest on lap 25 with a wild roll through turns three and four. Oldfield remained in control through the remaining laps to claim the state crown, with Hallett and Prosser also holding steady to complete the podium. Goodyer and Morgan Jnr rounded out the first five ahead of Kratzmann, Whell, Saller, Farrell and Hoffmans, with Newton, Ayers, Mann, Pholi, Baumber and Kristy Bonsey the remaining finishers.

Despite a restart on lap five that evaporated his sizable advantage, Nathan Smee remained in control to win the opening Midget heat ahead of Michael Kendall and Victoria’s Harley Bishop.

Starting from pole position in heat three, New Zealander Hayden Williams was swamped by the field before heading infield and out of action for the night. Michael Stewart surged from row three to win in advance of another Kiwi in Max Guilford, with Matt Jackson third.

With the relegation of both front row starters in Bernie Clark and Barrie Gibbs after a failed attempt to get heat four underway, Dylan Menz found himself on the front row and subsequently led throughout. Starting 10th, Whittaker was sensational in his surge to second, with Matt O’Neill keeping Smee at bay for third.

An incident in turn four on lap two in heat five resulted in a collision between teammates Brad Dawson and Farmer that left the latter upside down, with Paulger also a casualty. With Brendan Palmer and Jesse Harris also failing to finish, just four cars remained to greet the chequer and it was Troy Ware first to the flag, leading home Jackson, Daniel Paterson and Gavin McDowell.

Currie clinched the final heat over Kendall and Stewart, although a pre-race inversion would result in all three starting from row four or further back in the feature.

The B Main ended in spectacular fashion with McDowell upside down and Palmer coming to rest atop Darren Dillon in turn one. With Clarke and Glenn Prowse also failing to go the distance, the remaining finishers in Bishop, Paulger, Guilford and Rob Stewart all advanced to the feature.

With so much rain throughout Brisbane during the week, it was hardly a surprise that the track would prove somewhat trickier as the night progressed, yet there were those who showed little regard for the conditions and subsequently paid the price. With Menz leading the field away from pole position, it was Ware who became the first casualty when his all-or-nothing bid to secure the lead resulted in a crash through turn one on lap two. The ensuing restart only made it as far as turn four before Scott Doyle launched into a series of somersaults. The next interruption came on lap eight when Paterson tipped over in the back straight and was collected by Gibbs, putting both cars on the grass, to be joined by Stewart, Dillon and Jackson before any more laps were completed. With Guilford heading infield soon after the resumption, just 13 cars remained with more than 40 laps still to run. The first extended period of uninterrupted racing enabled Kendall and Currie to reel in the leaders, advancing to third and fourth respectively on lap 11. Currie moved to third on lap 14, only for Kendall to take it back on the next circulation. A flip from Smee in turn one on lap 16 bunched the field again with Menz still at the front of the queue ahead of Casey O’Connell, Kendall and Currie. When Kendall headed infield on lap 20, Currie moved to third and then advanced to second when O’Connell exited a lap later during yet another restart, triggered this time by a spin from Bishop in turn two. Just nine cars remained with more than half race distance still to run and the lead change came on lap 24 when Currie slipped ahead of Menz, who dropped another spot to Whittcaker on the next lap. In his pursuit of Currie, Whittaker edged closer with each circulation. Perhaps showing his hand a little early with a slide-job through turns three and four on lap 37 that took him to the front momentarily, Whittaker found himself unable to defend the immediate counter–attack from Currie. With no further opportunities presenting over the remaining laps, Whittaker had to settle for second, with Michael Stewart more than three seconds adrift in third spot. Geering, Brien and Liam Williams were next best as Menz backslid to what would be seventh at the flag, with Bishop and O’Neill the only others to go the distance.

Having completely dominated the series throughout the season, it was hardly surprising to see Bruce Marshall, Steve Price and Steve Potts gather on the podium once again for the final round at the completion of the final round of the Shock Absorber Therapy AMCA Nationals Track Championship. With Marshall snaring two heat wins to earn pole position for the feature, he would lead all 20 laps to clinch his third Archerfield feature win for the season, despite the close attention of a persistent Price. Having also picked up a heat win, Potts finished the feature in third spot ahead of Queensland champ Tony Blanch, whose lack of progress in his opening heat race proved costly and resulted in him starting from row five despite a win in his second outing. Brett Robotham rounded out the first five ahead of Graeme Holland, Scott Hitchcock and Thomas Vickery, with Mark Taylor and Lewis Gamble completing the top ten.

Terry Leerentveld was unstoppable in the Modlite events, winning two heats before following up to score an easy win in the feature. Kyle Honour finished more than three seconds adrift in second spot, with Luke Harrison home third ahead of Maddi McGee and Anthony Stewart. Next in line were Tyson Snow, Kurt Grambower, Abi Meehan and Cameron Lamb. Having scored a heat win, Steve Collins suffered a setback before the feature got underway but would ultimately finish tenth overall despite spending the first four laps on the infield.

The 2021/2022 season draws to a close next Saturday night (June 4) with the final round of the East Coast Logistics Sprintcar Track Championship and the Wingless Sprints 50-lapper, along with Lightning Sprints, Formula 500s, Microsprints, RSA Sedans, Stockcars, Open Sedans and Formula 500 Juniors.