Oldfield, McHugh or somebody new?

Oldfield, McHugh or somebody new? 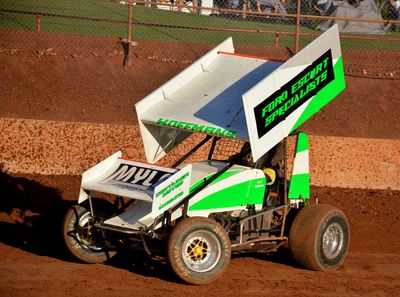 If, as they say, the first sign of insanity is doing the same thing over and over again but expecting a different result each time, then it seems there may well be a large number of Sprintcar competitors on the brink of madness. Each week they go through the motions, seemingly with a belief that following the same routine will eventually lead to a change in fortunes and they will find themselves in victory lane. So far this season, however, such hopes have been dashed for the overwhelming majority of competitors and, as such, three drivers have dominated the results. This Saturday night (November 27), other teams will need to find something new in their arsenal if they intend to make any impression in round five of the East Coast Logistics Sprintcar Track Championship at Archerfield Speedway. After all, Lachlan McHugh and Luke Oldfield are hardly going to make it easy for anybody intending to upstage them, although the absence of Tasmanian gun Jock Goodyer ensures that, at the very least, there is one spot on the podium up for grabs. Also featuring on another huge program that has once again attracted more than 100 competitor nominations will be round three of the Shock Absorber Therapy AMCA Nationals Track Championship, plus Dirt Modifieds, Formula 500s, Wingless Sprints and a combined field of Open and Outlaw Sedans, along with Formula 500 Juniors.

In the ECL rounds completed so far this season, Cody Maroske and Tim Farrell are the only drivers outside the Oldfield-McHugh-Goodyer triumvirate to have featured on the podium, with Maroske having done so on two occasions. Farrell’s big run in to third place at the previous round two weeks ago should certainly have boosted his confidence and also delivered plenty of hope to all other runners that success may well be within reach. However, failing to reflect on the shortcomings that have thus far stymied their championship campaign will only serve to ensure that the series leaders continue on their winning ways. Included in the field again this weekend are several drivers with feature race-winning history in Kevin Titman, Brent Kratzmann and former track champion Aaron Kelly, with the latter having shown enough to suggest that he will feature at the front of the field if he can rid himself of the bad luck that has hampered his recent results. Darren Jensen, Karl Hoffmans, Adam Butler and young Jy Corbet have been impressive on occasions without being able to deliver when it matters most, so no doubt they will be fuelled by these missed opportunities.

There is a very similar divide developing within the AMCA Nationals ranks as well at the moment with a cabal comprising Bruce Marshall, Steve Potts, Steve Price and Shane McKinnell thus far proving a cut above their opposition. Nathan Tomkins is the only driver outside this quartet to finish on the podium thus far across the opening two rounds of the Shock Absorber Therapy Track Championship and he again looms as their biggest threat and, although Graeme Holland and Troy Price have been inside the top five in feature race action, they might need a few things to fall their way if they are to find themselves finishing further up the order.

With border restrictions still in operation between Queensland and New South Wales, the large number of Dirt Modified competitors that would typically converge on Archerfield from throughout northern New South Wales are unable to make the trek north, leaving a smaller-than-usual field to hit the track for their season debut. Australian champ Kevin Britten is the obvious favourite, but with a line-up that includes Geoff Phillips, David Clark, Terry Leerentveld, Sam Bruggy and Super Sedan star Matt Pascoe in Ray Klarich’s Super Rooster #95, more than half the field can be considered a genuine chance.

Round four of the Mainstreme Automotive Formula 500 Series is shaping as a very hotly contested clash between Queensland champion James Kennedy and the husband-wife duo of Kristin and Liam Williams. All three have claimed feature race victories this season and, with their previous appearance having been curtailed by rain after just one heat race, this will be the first time that the three racers have faced off at Archerfield this season. It was Liam Williams who won the opening feature race of the season at Archerfield, but the three-time national champ was unable to keep pace with Kennedy in round two, while Kristin Brown blitzed both boys, and the rest of the field, in Toowoomba earlier in the season to secure her first win as a racing mother. Some team tactics may be needed to assist Kurt Wilson and Tom Partington in their bid to reach the top step of the podium, while any hint of slippery conditions should have Brock Thornton bristling with confidence given his stunning heat race victory in the wet just a few weeks ago.

Having also endured a washout at their last scheduled appearance, Wingless Sprint competitors will be primed for a strong showing with the likes of Liam Atkinson, Andrew Robinson, Lachlan Robertson, Robert Mazzer, Jayden O’Toole, Jamie Usher and Maryborough-based brothers Brody and Scott Thomsen all expected to be in the mix as the feature race unfolds. Given their willingness to assist in trying to get the track back into shape at their last outing, which ultimately proved futile despite their best efforts, there is probably no category more deserving of a moment in the spotlight.

Gates open at 2.30pm for online ticketholders, with early racing from 4.30pm. The main program, which gets underway at 6.00pm, will also feature Formula 500 Juniors and the first appearance for the season from the newly combined Open A and Outlaw Sedans, with the merging of categories implemented to ensure bigger fields of cars that share many aesthetic and technical similarities.