Oldfield, McHugh and Goodyer too

Oldfield, McHugh and Goodyer too 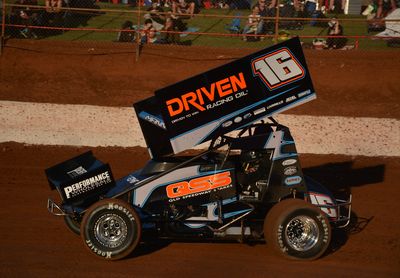 With the thrilling series opener still fresh in the minds of all who witnessed it, Luke Oldfield and Lachlan McHugh will resume hostilities in round two of the East Coast Logistics Sprintcar Track Championship at Archerfield Speedway on Saturday night (October 16). It was Oldfield who prevailed here two weekends ago over McHugh in what was an epic scrap and, when the pair met again in Toowoomba last Saturday night, both were on the podium in the feature race. It was Oldfield who again proved the quicker of the two, yet he still had to settle for second spot behind Tasmanian gun Jock Goodyer, whose inclusion in the field again this weekend will no doubt have Oldfield, McHugh and the rest of the 29-car field primed to deny the interloper from interstate in his bid for back-to-back wins.

Also on a packed Archerfield program that has attracted more than 100 competitor nominations will be round two of the Petzyo Sprintcar Development Series and the opening round of the Shock Absorber Therapy AMCA Nationals Track Championship, along with Modlites, Compact Speedcars, Limited Sedans and Formula 500 Juniors.

As the only drivers who have scored feature race wins in the opening weeks of the season, Goodyer, Oldfield and McHugh will no doubt be at the forefront of the action again this weekend, however all three are fully cognisant of the challenge that awaits them on Saturday night when they take on a field that features several feature race winners and regular ECL championship front runners. Having chased down McHugh to lead the opening round with a only a handful of laps remaining, Cody Maroske ultimately found himself shuffled back to third in the scramble to the chequer and will no doubt be determined to ensure that, should he find himself in a similar situation this weekend, he can fend off the challenge and make his way to victory lane. A barnstorming run from deep in the field by Bryan Mann in the opening round feature race suggests that, with a stronger qualifying performance, he could very well feature in the fight at the front of the field, while former track champion Aaron Kelly will be desperate to bounce back after being forced infield in the closing stages of round one whilst running strongly in fourth spot.

Brent Kratzmann, Adam Butler and Kevin Britten also impressed in round one, while both Randy Morgan and Ryan McNamara are no strangers to the feature race podium and will looking to improve on their opening round efforts. The return of Kevin Titman adds further strength to the line-up, while a welcome newcomer to the ranks making her ECL series debut will be Toowoomba’s Tarhlea Apelt, who joins Ryan Newton in making the transition from Formula 500 competition. Each driver will contest time trials and two qualifying heats in a bid to secure a spot in the Spanloc Dash, the winner of which will be afforded the opportunity to accept the BK Trading Challenge and invert the feature race field and chase an additional $1500 in prizemoney. With $100 also up for grabs courtesy of United Waste Services for the Hard Charger in the feature race, there is certainly plenty of incentive for the pole qualifier to back themselves and take the challenge.

In the Petzyo Development Sprintcars, nine drivers with varying levels of experience will face off in their own series of heat races and final, battling to secure a place in the B Main and, perhaps, a start in the feature race.

The opening round of the Shock Absorber Therapy AMCA Nationals Track Championship is certainly shaping as a typically tight tussle. Whilst most drivers in the field will be hitting the track for the first time, Bruce Marshall and Shane McKinnell have both ventured north to Bundaberg in recent weeks and both have emerged with feature race wins. Whilst the field is obviously much stronger this weekend than it was on either of those occasions, that early season success should instil plenty of confidence and might just prove the difference when the feature race is on the line. Steve Potts and Steve Price are never far from the front of the field but will only find themselves in contention once again if they can fend off the challenge that will invariably come from the likes Brett Robotham, Nathan Tomkins, Michael Denning, Graeme Holland and Kevin Stow.

There is rarely any shortage of Modlite competitors wanting to unleash on the Archerfield clay whenever the opportunity arises and that is the case once again for their first appearance of the season, with 20 of the pocket rockets confirmed. The fight between current top dog Sam Gollschewsky and category king Terry Leerentveld is expected to produce plenty of action, but neither can afford to let to lose sight of the threats that lurk elsewhere in the field, such as Nathan Politch, Chris Fing, Dan Lewis, Callum Beerling, Chris Were and Kyle Honour.

Tim Devine is the solitary newcomer amidst a field of familiar faces on the Compact Speedcar entry list and the biggest question to be answered on the night will be whether anybody, in the absence of his main rival from last season in Harry Stewart, can step up and take deny Queensland champ Bodie Smith a winning start to the season.

Gates open at 3.00pm for online ticketholders, with early racing from 4.30pm. The main program, which will also feature Limited Sedans and Formula 500 Juniors, will get underway at 6.00pm. For those unable to purchase tickets online, the ticket box will open from 4.00pm