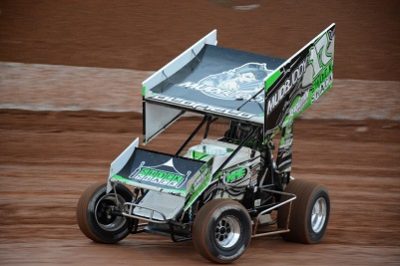 Refusing to surrender his title without a fight, Luke Oldfield scorched to victory in round 15 of the East Coast Logistics Sprintcar Track Championship at Ausdeck Patios Archerfield Speedway on Saturday night (May 19). Recovering from a setback earlier in the night that left his #17 Mud Buddy mount with a ruptured fuel tank, Oldfield advanced from position six to deny Ben Hilder a maiden feature race win, with Bryan Mann surviving several challenges to secure third ahead of Cody Maroske and Michael Saller, with series leader Andrew Scheuerle snaring sixth.

In a thrilling finish to the Wingless Sprint 50-lap Feature Race, Glenn Wright grabbed the lead on the final lap to edge Brant Chandler, with Sydney’s Harley Smee snaring third in advance of Cody O’Connell and Paul Robinson.

A couple of late withdrawals left 25 cars to take on the clock in Sprintcar time trials and it was Mann who emerged with KRE Fast Time, stopping the timer at 11.680 to edge out Oldfield (11.689) and Dan Murray (11.760). Peter Lack was next quickest ahead of Hilder, Michael Saller and Brock Dean, with Maroske, Scheuerle and Brent Kratzmann rounding out the top ten.

Nelson Reddacliff looked to have the opening heat safely in his keeping until a moment in turn four enabled Brett Minett to pounce for the win ahead of Brad Ayers, leaving Reddacliff third at the flag.

Victoria’s Peter Milnes established a sizeable lead early in heat two and then held on to keep a fast-finishing Mitchell Gee at bay, with Kevin Britten third home.

Heat three went to Scott Genrich over Scheuerle and Brodie Tulloch, while the fourth qualifier fell in favour of Maroske in advance of Mark Pholi and Britten.

Heat five could ultimately prove critical in the outcome of the championship with Mitchell Gee, in his first outing as the newly ordained Queensland champion and running second in the track championship points at the time, crashing out when he was unable to avoid Oldfield, who himself had been powerless to evade a sputtering Milnes in the back straight, putting all three cars on the infield. With a new fuel cell installed, Oldfield would return but both Milnes and Gee were done for the night.

There was more action in the final heat when a mistake from Minett in turn four on the opening lap resulted in contact between Brad Ayers and Lack that put both cars on the grass. Saller subsequently sailed home to down Mitch Gowland and Randy Morgan.

Mann emerged from the preliminaries as top qualifier before bumping himself back to fourth in the pre-race draw for the Dash, elevating Hilder and Saller to the front row. With the exception of Oldfield’s advance from eighth to sixth, the field finished as they started with Hilder winning from Saller, Murray, Mann and Kratzmann, with Oldfield followed home by Scheuerle and Maroske.

In a drive that belies his lack of experience, Morgan raced around the outside to round up Karl Hoffmans, Gowland, Minett and Ayers on his way to winning the B Main. Having led from the opening lap, Gowland found himself shuffled to third in the final turn as Ayers also slipped ahead, with Minett grabbing the final transfer into the main event.

Hilder shot to the front of the feature at the drop of the green with Saller and Mann in pursuit as third-starting Murray found himself shuffled back several spots on the opening lap. Lack’s run of outs continued when a clash with Murray exiting turn two left him prostrate and in the path of Morgan, resulting in both cars exiting the event. Hilder continued to lead at the resumption as Oldfield started to make forward progress, having climbed to third when Minett stopped in turn three on lap nine to halt proceedings again. It took just three laps into the recommencement of racing for Oldfield to find his way to the front and a final interruption on lap 18 following an incident in turn one that put Tulloch out and left Kratzmann sans front wing proved no barrier to Oldfield’s objective as he charged to the chequer to set up a thrilling championship conclusion next Saturday night. Saller slipped back as the laps wound down, enabling Mann to advance into third ahead of Scheuerle, although it would be Maroske whose late surge threatened to bump Mann from the podium. In the end though, Maroske managed fourth ahead of Saller and Scheuerle, with Murray steadying to secure seventh. Britten, Dean, Ayers and Gowland were next in line, with Reddacliff, Pholi and Kratzmann the remaining finishers.

In Development Sprintcar action, Nathan Black won the opener over Jason King and Andrew Baumber, with Peter Campbell home first ahead of David Kenway and Libby Ellis in the second heat.

The Wingless Sprint feature race looked on track to run 50 laps without interruption until Geoff Davey lost a wheel with just seven laps remaining to bring about the first and only stoppage. Prior to this moment, Brant Chandler had established what looked to be a winning margin over Glenn Wright after the pair had spent a large portion of the race engaged in a great dice. Smee was the early leader until Chandler took over on lap six, only for Wright to charge to the front on lap eight. Chandler chased doggedly for the next 20 laps before relegating Wright on lap 30 and clearing away to establish what seemed a big enough buffer, only for Davey’s demise to eradicate his advantage. Chandler continued to hold sway until Wright moved ahead on lap 45, only for Chandler to go ahead again on the next circulation. Just when the order seemed settled, Wright surged on the final lap to snatch a last gasp win. Having twice been bumped out of the top three, firstly by Paul Robinson and then by Cody O’Connell, Smee rallied late to reclaim third, leaving O’Connell fourth ahead of Robinson and John Slack, with Natasha Herne, Michael Butcher, Josh Dreaver and Mick Reid the best of the rest.

Terry Leerentveld, Dan Lewis and Jac Carnall were Modlite heat winners and it was Leerentveld who backed up to take out the feature race and demolish the 15-lap record. Hancey finished second in all three heats before securing the same result in the feature to wrap up what has been a stellar season of championship successes for him. Modified Sedan standout Rodney Pammenter took a liking to the little cars and raced to a third place finish ahead of Steve Collins, Lewis and Neil Gregson.

Following heat wins to Russ Hardy, Steve Potts and Damien Groer, it was Durston who led every lap of the AMCA Nationals feature race to win the final round of the Shock Absorber Therapy Track Championship. A perennial podium placer, Potts did it again with second on this occasion, some five seconds clear of third-placed Hardy. Declan Brownsey finished fourth ahead of Michael Mason, who was the last car to remain on the lead lap.

Darren Kane was a class above the very small field of Late Models, winning the opening two heats before settling for fourth in the final preliminary with a pole start in the feature race assured. Kane cleared away to win the 15-lap feature with ease, his biggest challenge coming courtesy of negotiating traffic as he romped home ahead of David Doherty, Carter Armstrong and Aaron Van Zeeland.

Ronnie Young won all three heats as a preview to his feature race winning performance in Ford vs Holden vs Sigma, leaving the field in his wake to defeat Mark Tookey, Troy Price, Michael Laver and Andy Reinhardt.

Racing continues at Ausdeck Patios Archerfield Speedway next Saturday night (May 26) with the final rounds of the East Coast Logistics Sprintcar Track Championship and the Polar Ice Midget Track Championship, plus Formula 500s, Compact Speedcars, Fireworks and the Caravan, Boat and Dunny Derby.