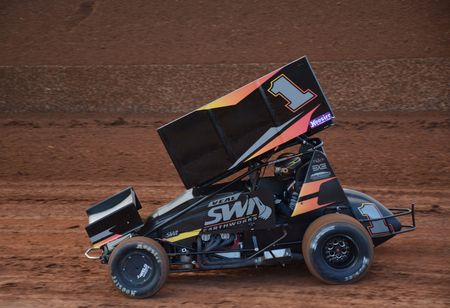 Australian champion Jamie Veal has taken out the 2021/2022 Titan Garages Brisbane Sprintcar Open, moving forward as those around him exited the contest before pouncing late in the 35-lap final to round up Matthew Dumesny and take control of the race. Dumesny, who had inherited the lead when runaway leader Luke Oldfield was forced to stop in turn four to avoid collecting a spun car, finished in second spot, with Jock Goodyer bouncing back from a rollover in the Pole Shootout to finish third. Oldfield recovered to salvage fourth ahead of Aaron Kelly on a night that saw some reputations tarnished and a series of incidents that conspired to push the feature race to the brink of the venue curfew. Adam Butler finished sixth in advance of Darren Jensen, with Randy Morgan the only other driver to go the distance.

Having already lost the opening round of the Sprinter States Series on Wednesday evening and the scheduled first night of racing in the Brisbane Open to inclement weather, promoters John and Kathy Kelly persevered with a one-night format for Saturday and their refusal to concede in the face of threatening conditions throughout the day ensured the race meeting was completed and a champion crowned. For most of the night, the so-called ‘stars’ from interstate and overseas were unable to keep pace with a humble family operation from the Gold Coast, only for the fickle finger of fate (aka Ian Madsen) to intercede, denying Oldfield what would have been both a deserving, and enormously popular, victory. In the end though, Veal avoided the chaos that unfolded around him and surged when it mattered most to secure a $10 000 pay-day.

A field of 41 cars were split into two flights for time trial qualifying, with each driver taking two timed laps. It was Goodyer who emerged fastest overall with a best lap of 11.257 to edge out Oldfield (11.269), Veal (11.497) and James McFadden (11.508), with Lachlan McHugh recording an 11.528 on his opening lap for what would be the fifth best time of the session, only for the car to veer sharply entering turn four and slam the wall, putting him out of action for the night. Kristy Bonsey brought the crowd alive when she clocked 11.553 to time sixth overall, with Madsen (11.574) Brock Hallett (11.578), Marcus Dumesny (11.592) and Ryan Newton (11.599) rounding out the top ten as Californian World of Outlaws star Carson Macedo found himself with a lot of work to do, having timed 13th in his flight and 27th overall. Ryan McNamara was another to make an early exit from the event when his KRE Race Engines/Locked Down Apparel Triple X launched into a wheel-stand exiting turn two that pitched the car into a series of rolls along the back straight. Meanwhile, having timed poorly as a result of his front wing becoming detached, Brent Kratzmann would become the third driver to take no further part in proceedings.

A delighted Nelson Reddacliff withstood the advances of Macedo to win the opening heat of the night, with Sam Bylsma home in third spot as Karl Hoffmans kept McFadden and Matt Egel at bay to finish fourth.

Heat two saw Matt Dumesny quickly round up the front row starting pair of Leigh Holman and Kevin Britten to assume the lead, only for the latter to ride out a wild ride through turn one on lap three to become yet another whose night ended very prematurely. South Australia’s Brendan Quinn finished second ahead of Morgan, Jackson Delamont and Butler as Holman slipped to sixth.

With his front row partner Tim Farrell being unceremoniously pushed up-track by Dave Fanning in turn two, Mick Sauer pounced to assume the lead in heat three and remain in control to defeat Jensen, Newton, Fanning and Madsen.

Kelly was untroubled from pole position in heat four, leading throughout to down Allan Woods, Bryan Mann, Michael Saller and Hallett.

There was certainly drama aplenty in the latter stages of heat six, the first incident coming when Leigh Holman flipped out in turn one with three laps remaining. Just one lap into the resumption and the race was halted again as Kevin Titman fine-tuned his reverse parking skills in the back straight. In the end it was Macedo who prevailed over the local quartet of Bylsma, Pholi, Butler and Reddecliff, while a flat tyre as a result of contact with the stricken Holman put Egel on the infield.

There were no changes in the order for the duration of heat seven with Saller leading throughout to finish in advance of Farrell, Marcus Dumesny, Bryan Mann, Veal and Goodyer.

Another front row start for Kelly all but ensured another win in the final heat, this time outgunning Woods, Jensen, Hallett and Oldfield.

Given the number of casualties throughout the preliminaries, the C Main was duly scrapped and a 19-car field would saddle up for the B Main. Woods leapt to the front from the pole slot and led the field away, looming large on the tailenders after just three laps. Into turn one, Woods contacted Libby Ellis and was sent spinning into the wall and subsequently to the infield, anointing Quinn to lead the field at the restart. On lap seven, Bonsey zoomed to the front and had her sights set on a deserving feature race berth until she also struck trouble with a backmarker in Hoffmans, putting both cars on the grass. Madsen would inherit the lead and take maximum advantage to lead Fanning, Quinn and Reddecliff in making the transfer to the back of the feature race field, with Delamont and Sauer amongst those who missed the cut.

The bronze round of the Pole Shootout would see Goodyer suffer a significant setback when he crashed out in turn two, leaving Macedo and Matt Dumesny to outpace Hallet and proceed to the next stage. It was Macedo and Dumesny advancing again in round two, this time accounting for Pholi and Butler to set up a showdown with McFadden and Oldfield. Much to the approval of the local fans, Oldfield proved too hard to handle for the out-of-towners, locking up pole position for the main event. Macedo continued his climb to secure a spot on the front row, with McFadden bettering Dumesny to secure position three.

From the drop of the green to get the feature underway, Oldfield looked the class of the field and led the pack through turn one as Macedo manhandled the Empire Machinery/Complete Parts #99 up high and invited Matt Dumesny to assume second position. The first interruption came on lap two to retrieve an immobile Mann from turn two and, once underway again, the focus switched to turn two as Pholi and Fanning joined forces to send Newton upside down out of action. Despite the looming curfew, Veal and Fanning decided to delay proceedings further by arguing over starting positions, but when racing finally resumed, Oldfield faced little pressure from those behind. Macedo was quickly back in second spot with McFadden slipping into third before back-to-back restarts were required when Madsen stopped in turn four on lap six and then Fanning did likewise a lap later. Oldfield maintained his lead throughout the interruptions, another of which came on lap 11 when Macedo decided to park in turn four but forgot to tell McFadden of his intentions, the end result being a couple of cuddling cars being separated and deposited on the infield. Dumesny again took on the role of principal pursuer, with Butler having a blinder in third. Looking very comfortable out front it was, ironically perhaps, lap 17 on which Oldfield saw his victory hopes dashed when he happened upon Madsen and Quinn stationery in turn four and had to stop the Advanced Mobility Cool to avoid a collision. With Oldfield now at the back and 18 laps still to run, Dumesny found himself leading the parade with Butler second, although Goodyer pounced immediately to secure that position before another restart was needed to remove Pholi and Marcus Dumesny from opposite ends of the track. Through a process of elimination, Veal was now fourth and another halt was called to proceedings when Reddecliff somehow failed to notice a slowing Fanning, the resultant contact sending Reddecliff upside down in turn one. With Saller also exiting, just eight cars remained with 11 laps to run and Veal now found himself third, with Kelly also eyeing a potential podium. Thankfully, the final laps were completed without incident and, as Veal chased down Goodyer and Dumesny to assume the lead, Oldfield would fight his way back to fourth ahead of Kelly, Butler, Jensen and Morgan.

For the second time in as many shows, local Wingless Sprint competitors were comprehensively outpaced by the father/son team of Mark and Marshall Blyton in the feature race, with Blyton Snr prevailing on this occasion to win round seven of the Boss Hoggs Steakhouse Track Championship. After leading the first 12 laps, Mark ceded the lead to his progeny, only for Marshall to make contact with a lapped car four laps later and suffer a flat left front tyre, slipping to fourth and handing the lead back to the patriarch. Robert Mazzer chased hard to annexe second spot ahead of Michael Butcher and Blyton Jnr, with Ryan Harris home fifth. Jamie Usher, Liam Atkinson and Chris Catchpole were next best, with Andrew Robinson and Jayden O’Toole rounding out the top ten.

Steve Price led the first 12 laps of the AMCA Nationals feature race before finding himself relegated by Steve Potts, who went on to win round six of the Shock Absorber Therapy Track Championship. Both Price and Potts recorded heat wins, as did Lee McKinnell, who cut the quickest lap of the feature in his drive into third place ahead of Tony Blanch and Bruce Marshall, who was also a heat winner and maintained his record of a top-five finish in every round. Tim Luscombe and Brett Robotham were the only others to finish on the lead lap, followed by Graeme Holland, Lewis Gamble and Shane Stacey.

Liam Williams downed Brock Thornton and Amanda Chaffey to win the opening Formula 500 heat race. Heat two went the way of Queensland champ James Kennedy over Kacy-Lee Black and Liam Williams, with heat three won by Kurt Wilson from Kaydon Iverson and Tomas Partington. Despite starting fifth in the feature race, Kennedy had assumed the lead after just four laps and proved too pacey for the rest of the field. Iverson and Partington filled the minor placings, while Wilson finagled fourth ahead of Kristin Williams, who was followed home by Thornton, Mitchell Whittaker, Chaffey, Ryan Potts and Chae O’Brien.

The next event at Archerfield Speedway is a two-night affair on January 21/22 featuring the Australian Dirt Modified Championship and the Queensland Midget Championship, along with Wingless Sprints, AMCA Nationals, Modlites, Compact Speedcars, Open B/Limited Sedans and Formula 500 Juniors.