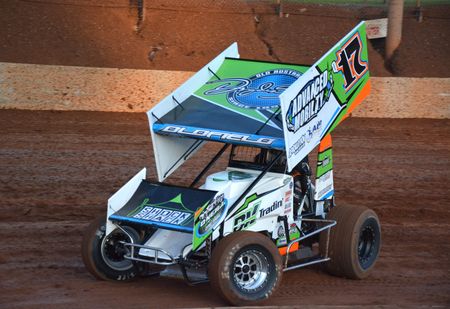 In what may prove to be the final Sprintcar race contested at Archerfield Speedway, it was somewhat fitting that Luke Oldfield triumphed in the final round of the East Coast Logistics Track Championship. Despite having already wrapped up the championship, Oldfield showed no mercy to the pair of young guns who battled him for the win. Having qualified on the outside front row, Oldfield bided his time behind pole qualifier Taylor Prosser and even dropped to third behind Ryan Newton on a couple of occasions before making his way to the front with nine laps remaining. After securing his first ever pole position start, Prosser was no doubt disappointed to be denied a win, but finished the season with his best ever performance, while Newton was his typically spectacular self in third spot. Kevin Titman surged late to secure fourth ahead of Adam Butler and Aaron Kelly, who finished second overall in the championship, with Darren Jensen, Anthony Lambert, Mark Pholi and Tim Farrell rounding out the top ten.

In the Wingless Sprint 50-lap Shane Ryan Memorial, Jason Bates was a cut above the field and enjoyed a largely unchallenged run to lead home Mark Blyton and John Egan in a New South Wales sweep of the podium placings.

A 28-car field assembled on a cold Brisbane afternoon for the final round of track championship competition and it was young Jy Corbet who found the fastest way around a track that proved challenging from the outset. Corbet stopped the clock at 12.446 to edge out Newton (12.570), Oldfield (12.600) and Prosser (12.612) to secure KRE Quick Time. Butler was next quickest ahead of Brent Kratzmann, Randy Morgan, Bryan Mann, Richard Morgan and Tim Farrell, with Kelly and Allan Woods sitting just outside the top ten, although both would move up the order as the night unfolded.

The opening heat race saw Dan Moes round up Pholi on lap two to assume the lead and remain out front to lead Pholi and Kratzmann under the chequer.

Jensen led much of heat two, only to concede the top spot to Kelly with two laps remaining, with Karl Hoffmans home third.

Heat three was very straightforward indeed with Titman leading from the outset to win in advance of Harry Stewart and Tim Farrell.

Jayden Peacock jumped clear of the field to establish a good lead in heat four, only to spin himself to a halt in turn four on lap five. Jensen took over the front running to lead home Newton and Brad Ayers.

Hoffmans seemed a certain winner in heat five until he got caught napping at a late restart and surrendered the lead to Pholi, with a last-lap pass elevating Oldfield to third ahead of Butler.

The final heat of the night resulted in a win for Anthony Lambert in advance of Woods, with Trent Vardy in third spot.

Despite being guaranteed a feature race start if he remained second behind Ayers at the conclusion of the B Main, finishing runner-up didn’t appeal to Randy Morgan so he rounded up Ayers on the final lap to snatch the win. Also securing a place on the feature race grid were Moes and Hoffmans, with Peacock failing to make the cut in fifth place.

The opening round of the Pole Shootout was interrupted when Kelly backed into the turn one wall, leaving him to start seventh in the main event as Woods and Kratzmann outpaced Mann to advance to the next round.

Woods maintained his momentum to again outpace his rivals in round two, with Prosser also moving forward into the final showdown against Oldfield and Newton, confining Butler and Kratzmann to row three.

In the final shootout, Prosser left his run to the last possible moment as he edged out Oldfield to secure pole position for the big show, leaving Newton and Kratzmann to launch from row two.

Prosser led the field away in the feature, with Oldfield slotting into second spot ahead of Newton, Kratzmann and Woods. Heading into turn one on lap three, neither Kratzmann nor Woods was prepared to concede any ground to the other and the end result was Kratzmann upside down and both cars out of action. Prosser continued to lead with Oldfield in close pursuit, the two making contact along the main straight on lap 10. Newton was charging hard in third spot and rounded up both Oldfield and Prosser to grab the lead on lap 11, only to be relegated by the latter on the next lap before again surging to the front on lap 14. Prosser went back to the front on the next lap, with Oldfield also moving back ahead of Newton on lap 19. With Prosser unable to navigate past the tailenders, Oldfield pounced to grab the lead and wasted no time in putting lapped traffic between himself and Prosser. A spin from Richard Morgan in turn three bunched the field for a final restart, but Oldfield was untroubled in securing his sixth ECL feature race success for the season, leading home Prosser and Newton. Advancing from 15th, Titman surged into fourth with a late pass on Butler, with a sixth-place finish from Kelly enough to secure second overall in the championship standings. Jensen, Lambert, Pholi and Farrell were next, followed by Randy Morgan, Moes, Mann, Richard Morgan, and Hoffmans, with Trent Vardy and James Matthews rounding out the finishers.

Whilst the night started well for Ben Manson with a win over Bailey Goodwin and Errol Campbell in the opening Wingless Sprint heat, Ian Milnes was not so fortunate and found his night over before it even started when he clouted the wall and rolled in the main straight as the field took the green flag to get heat two underway. John Egan would go on to take the race, finishing more than five seconds clear of NSW champion Jacob Jolley, with Jamie Usher third.

Ryan Harris snuck home ahead of Jolley by the barest of margins in heat five, with Nicholas Whell grabbing third, while a win over Wayne Logue and Blyton in the final heat was enough for Bates to secure pole position for the feature race.

Shane Sheedy, Jayden O’Toole and John Buettel filled the top three spots in the B Main, with Brody Thomson clinching the final transfer spot after a torrid dice with Marshall Blyton, who must have been particularly frustrated at missing the feature given only 19 cars would face the starter.

From the outset, Bates went to the front and never came under serious threat despite the experience of Blyton, who shared the front row and ran second throughout. Jolley started on the inside of row two, only to endure a spin exiting turn four on the opening lap that would see him banished to the rear of the field for the restart. Remarkably, when Sheedy launched over the concrete wall in turn four and came to rest in the bosom of the catch fence, just seven laps had been completed and Jolley was as high as sixth. From the restart, Jolley continued his advance and found himself fourth after 15 laps, only to throw it away with an attempt to slip underneath third-placed Goodwin through turn one on lap 17 that not only seemed somewhat impetuous with so many laps remaining, but it never looked likely to succeed and the end result being Jolley ordered to the infield for his second infraction, to be joined almost immediately by Goodwin with a flat left rear tyre, elevating Egan into third. The top three remained unchanged from this point, despite the best efforts of Usher, who found a way past Mazzer on lap 35 and was closing in at a rapid rate when the chequer fell. Mazzer finished fifth ahead Ryan Harris, Peter Logue, Whell, Wayne Logue, Dave Sansby and Buettel, with Manson the only other finisher.

It took until the final meeting of the season for the Formula 500 fraternity to realise that an inverted grid for the feature invariably makes for a better spectacle and that is exactly how things transpired. Liam Williams (2) and Boyd Chaffey were heat winners and would subsequently find themselves sharing the sixth row for the 20-lapper as Amanda Chaffey shot to the lead at the drop of the green. Having climbed into the top five after as many laps of racing, Williams found himself at the back of the bus when he tapped Tomas Partington into a spin in turn four and, with Boyd Chaffey also spinning, all three were ordered to the rear for the restart. Once underway again, Mitchell Whittaker pounced to snatch the lead from Amanda Chaffey, with Brady Argles and Brock Thornton engaged in a great scrap for third from which Argles would emerge with the final place on the podium alongside Whittaker and Chaffey. Charging through the field again, Williams would pounce on the final lap to relegate Thornton to fifth, with Kurt Wilson next best. Boyd Chaffey would salvage seventh, leaving Partington, Noah Ball and Adrian Farrell to complete the top ten.

Mark Anderson and Michael Cheeseman shared the spoils in the Open Sedan B heat races, but neither could match the pace of Ricky Price in the feature. Ben Harris looked most likely to challenge Price before a spin with three laps remaining saw him fall to fifth and allowed Cheeseman to move back into second spot, where he remained to the finish. Anderson annexed third ahead of Aaron Buchanan, Harris, Greg Dickinson, Michael Laver and the final finisher in Jayden Marengo.

Heat wins in Open Sedans A went to Les Eisenmenger and Wayne Kirkman, with the latter backing up in the feature race to snare his fourth win for the season. David Mortimer and Eisenmenger filled the minor placings, followed home by Colin Morris, Gary Kivela, Bob Ware and Travis Beasley. Running strongly in third place, Brad Trussel exited in spectacular fashion when he speared into the main straight wall on lap five.

With the future of Archerfield Speedway now very much uncertain, John and Kathy Kelly extend a huge, hearty thank-you to all of the sponsors, competitors, officials and fans who have supported their efforts at the venue over the last 22 years.