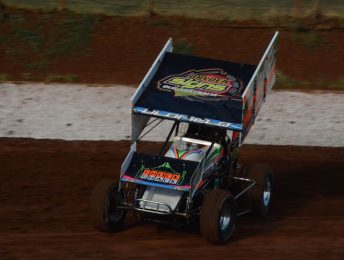 MEDIA RELEASE: Having upstaged Australia’s finest earlier this season in a round of World Series Sprintcars, Luke Oldfield has now beaten the world’s best Sprintcar driver with a stunning drive to victory in round eight of the East Coast Logistics Track Championship at Ausdeck Patios Archerfield Speedway on Monday night (January 1).

In a remarkable performance given his #17 Lucas Oils Cool lay crumpled and twisted earlier in the night after a heat race altercation, Oldfield climbed from position seven to become the fourth different driver to lead during the 35-lap event and then withstood the best efforts of World of Outlaws champion Donny Schatz in the closing moments to score a memorable win.

Schatz was sensational again, advancing from ninth on this occasion with another display of precision passing on a challenging track, but Oldfield proved one hurdle too many and he finished less than half a second shy of another visit to victory lane.

Having led the more laps than anybody else after wresting the lead from Lachlan McHugh on lap 15, current track champ Andrew Scheuerle was left ruing what might have been after falling behind both Oldfield and Schatz in the closing moments of the race.

McHugh finished fourth ahead of Bryan Mann, Peter Lack and Allan Woods, who started the event from pole position and led the first 10 laps before succumbing to McHugh’s advances.

The Pennsylvania-based pair of Lucas Wolfe and Logan Schuchart were next in line, with Darren Jensen rounding out the top ten.

The Dirt Modified Paul Britten Memorial feature race also proved to be the most memorable of events as Australian champ Kevin Britten barnstormed his way from the back row of the grid to score a remarkable win in the race that honours his father.

Suffering a flat tyre on lap two, Andrew Pezzutti’s race looked over before it really began, however the former national champion opted to continue and he somehow manhandled his #25 with sufficient finesse to finish second, having led through the middle stages of the race. Mitchell Randall, who inherited the lead when Lee McKinnell spun himself out of contention, led for more than 15 laps until succumbing to Pezzutti and then Britten for a third-place finish.

David Clark and Scott Cannon rounded out the first five and, with only half of the field still circulating at the completion of the 44 laps, it was Kevin Stow who secured sixth spot ahead of Trent Schofield, Nick Knott and David Blanch.

McHugh was next quickest ahead of Woods, Scheuerle, Oldfield and Brent Kratzmann, with Wolfe the best of the Americans in 12th position. Schatz was sitting further back in 19th overall, while Schuchart was hampered by a misfire that had him languishing in 28th.

Despite scoring maximum points in time trials, Gee found himself in the B main after failing to finish either of his heats.

Not surprisingly, he proved too pacey for the rest of the field and took out the 15-lapper in advance of Schuchart, who started deep in the field, with Maroske and Tasmania’s Callum Zizek also securing a place in the feature race field.

The Lucas Oils Dash mixed things up a bit with McHugh, as top qualifier, inverting the first six to put Woods in pole position.

Woods embraced the opportunity and led throughout to also start from pole in the feature. McHugh, Brent Kratzmann, Titman, Scheuerle, Murcott, Oldfield and Jensen completed the field.

The opening laps of the feature race saw Woods shoot to the front and lead the field through the opening laps with McHugh in pursuit. On lap 10, McHugh moved ahead of Woods, but only until held sway until Scheuerle demoted both of them five laps later.

The race ran without interruption until lap 28 when Murcott and Gee, who had advanced from 15th to fourth, tangled and stopped in turn two.

Further incidents, including a spin by Murray in turn three and a turn four stacks-on that put Murcott, Zizek and Titman on the infield, disrupted the closing stages of the race that saw both Oldfield and Schatz move ahead of Scheuerle.

Although Mann and Lack also relegated Woods, neither made much impression on the lead trio, but are no doubt happy to have beaten both Wolfe and Schuchart to the chequer. Behind Jensen came Brent Kratzmann, Gee, Whell, Maroske and Murray to complete the finishers.

Whilst missing a few of the nominated competitors, 19 Dirt Modifieds fronted for competition to tackle one of the most prestigious and gruelling races of the year in the Paul Britten Memorial.

Britten was a cut above the pack in the Pole Shootout, finishing four seconds clear of McKinnell, Clark, Wathen, Bruggy and Schofield after just 6 laps. However, at the completion of the race all six drivers were offered the challenge of starting from the back of the grid in the feature for the chance to collect an additional $1000 should they emerge victorious. Britten, Clark, Wathen and Bruggy accepted the challenge, leaving McKinnell to start from pole position with Schofield alongside.

It was McKinnell who led the opening laps but, in what proved to be a somewhat karmic series of events, both he and Schofield would spin themselves out of contention, leaving Randall at the front of the field with the three-wheeling Pezzutti in pursuit.

Bruggy was the first of the backmarkers to make inroads on the leaders, but the 18th-starting Britten was making some big moves high on the track and looking ominous.

Randall held sway until lap 23 when Pezzutti pounced with what looked to be a winning pass, especially when he remained in command at the 40-lap mark.

However, Britten was resolute in his determination and exacting in his execution as he pounced late in the race to round up both Randall and Pezzutti and score a remarkable win.

In the Lightning Sprints Silver Cup, Australian champion Kurt Wilson was untroubled in the 20-lap feature event, moving into the lead on lap four and expanding his advantage with each circulation to ultimately finish more than six seconds clear of Dave Fanning at the fall of the chequer.

Having emerged unscathed from an opening lap tangle with Keith Blatch for which she was banished to the rear of the field, Kirsty Kelly had climbed back to third by races end, slipping under Jason George in the final turn.

Randy Morgan dominated proceedings in the Formula 500 Junior events with three wins, while the other went to Nick Hodges.

Ben Robertson won the Open Sedan B feature and it was Wayne Kirkman who triumphed in the A feature.

The next meeting at Ausdeck Patios Archerfield Speedway is this Wednesday night (January 4) when World Series Sprintcars returns, plus the Polar Ice Midget Track Championship and Compact Speedcars.