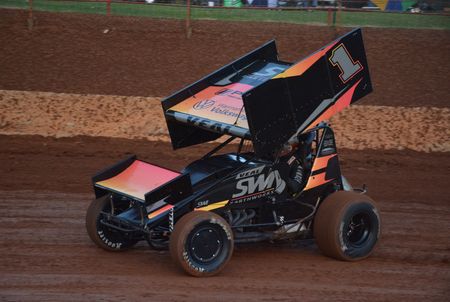 The countdown to the Australian Sprintcar Championship continues this Saturday night (April 9) at Archerfield Speedway when round 13 of the East Coast Logistics Sprintcar Track Championship will be decided. Having experienced his worst result of the season last weekend, series leader Luke Oldfield will be looking to bounce back in a big way with only one more Archerfield outing before the championship weekend. However, with several drivers having stepped up in recent weeks to announce themselves as feature race contenders, Oldfield will need to be at his very best from the moment he hits the track. A terrific field of Dirt Modifieds, both in quality and quantity, will also feature on Saturday night, along with supporting action from Modlites, Compact Speedcars, Open A/Outlaw Sedans and Stockcars.

To put it bluntly, Oldfield had a shocker last weekend, qualifying poorly and then enduring a crash in the heats that saw him relegated to the B Main, from which he advanced into second spot to secure a place in the feature. Another wipe-out on the opening lap of the main event would bring his night to a premature end for what would become only the second time this season that he has failed to feature on the podium. As an addition to the schedule as a replacement date for one of the Sprintcar fixtures lost earlier in the season due to inclement weather, it is understandable that a few series regulars might be missing from the entry list, but the fact that Australian champ Jamie Veal is in the field, along with two of the podium finishers from last weekend in Kevin Titman and Brock Hallett, the level of competition will most certainly not be lacking and Oldfield will relish the challenge of bouncing back to his best in such company. Veal is also seeking redemption after enduring a somewhat embarrassing display in round 12, with three spins throughout the night leaving him unable to mount any sort of challenge. It was certainly an uncharacteristic performance from the Victorian, who will be determined to make amends with his nationals championship defence looming.

Titman, meanwhile, enjoyed his best performance of the season in finishing second last weekend and now faces the challenge of replicating that kind of form on a regular basis, while Hallett has been improving with each outing and it will certainly come as no surprise to see the South Australian improve upon his third-place finish from the previous round. Young guns Taylor Prosser and Jy Corbet have enjoyed breakthrough podium results this season, while Adam Butler, Bryan Mann and Aaron Kelly were very much in the thick of the action last Saturday and it will only take the merest improvement, or perhaps a bit of luck, for one of this trio – or perhaps all three – to wind up on the podium again. An exciting addition to the field for this event is Callum Walker, a feature race winner at Archerfield who is making his return to local competition after an extended interstate campaign.

Given that so many competitors in the category hail from the flood-ravaged northern regions of New South Wales, a field in excess of 20 Dirt Modifieds is a terrific effort and perhaps beyond what was expected under the circumstances. Four-time national champion Kevin Britten heads the entry list and, as is the case any time he is in the field, he heads into the weekend as the pre-race favourite. He is always spectacular around Archerfield and his presence demands that everybody must perform at their absolute best if they intend to upstage him, which of course leads to some incredible action. Another national title winner in David Clark is amongst the starters and will be desperate for a strong result after being forced to miss the Australian Championship earlier in the season, while Terry Leerentveld is out to replicate, or improve upon, his podium result in the same event. Others amongst the Queensland contingent expected to feature prominently include Geoff Phillips and Ray Klarich, while the Grafton-based Chris and Dale Corbett loom as the biggest threats form a 10-strong New South Wales delegation.

It will certainly be a busy night for Leerentveld as he is also contesting the Modlites events, taking on current national champ Sam Gollschewsky and other regular front runners such as Kyle Honour, Dan Lewis and Callum Beerling, along with several new names making their first appearance at Archerfield.

Unless Compact Speedcar officials implement a race format that offers up some kind of challenge for Matt O’Neill, it seems likely that he will again dominate proceedings, leaving the rest of the field to fight for the minor placings. Richard Treanor, Dion Wilson and Dave Collins are expected to be at the forefront of the chasing pack and ready to pounce should O’Neill falter.

A similar scenario also seems likely to play out in the combined Open A/Outlaw Sedans because, if recent form is any guide, it will take a mistake, misfortune or some tweakage of the race format to prevent Wayne Kirkman from outpacing the field again. Should Kirkman strike trouble though, the likes of Les Eisenmenger, Brad Trussell, Robin Bains and Colin Morris seem the most likely candidates to fill the void.

Gates open at 3.00pm for online ticketholders, with general admission ticket sales from 4.00pm. Early racing commences at 4.30pm and the main program, which will also see the crash and bash Stockcars making their second appearance for the season, gets underway from 6.00pm.