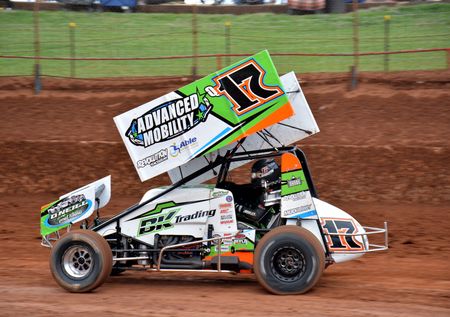 Luke Oldfield extended his lead in the East Coast Logistics Sprintcar Track Championship with a dominant display in round 10 at Archerfield Speedway on Saturday night (February 19). Starting from pole position, Oldfield led throughout the 30-lap feature race to finish ahead of South Australia’s Steven Lines and former track titleholder Aaron Kelly, with Ryan Newton and Taylor Prosser rounding out the top five.

In Midget action, Michael Kendall became the first driver to win multiple feature races at Archerfield this season when he prevailed in round seven of the TFH Series, inheriting the lead with eight laps remaining to lead home Scott Farmer, Kaidon Brown, Darren Dillon and Lachlan Paulger.

On a track that was super quick, yet offering opportunities to move forward, Newton did exactly that in the opening heat when he advanced from position five to win ahead of Luke Oldfield and Anthony Lambert.

Having established a sizeable lead through the first half of the race, Mitch Gowland looked a certain winner in heat two, only for his hopes to be crushed by Allan Woods and Aaron Kelly when they slipped ahead over the final two laps to finish first and second respectively.

Heat three fell in favour of Jy Corbet over Britten and Lines, while heat four saw Oldfield storm from row five to assume the lead and greet the chequer first ahead of Gowland and Farrell.

Lambert led throughout heat five to finish in advance of Woods and Newton before the final heat saw Corbet score a second win over Lines, with Prosser third on this occasion.

A very similar scenario played out in heat two of the Development Series with three cars again crashing out, leaving Moes to win again. Libby Ellis finished second on this occasion, with Nicholas O’Keefe home third.

Just five cars remained to face the starter in the Development Series final (C Main) and Moes was again the pick of the crop, with Ellis second again ahead of Brad Keiler who, having already been involved in several incidents throughout the night, launched O’Keefe into a series of somersaults along the main straight to land upside down under the chequer to be declared fourth.

After supplanting Gowland from the lead on lap two, Darren Jensen was untroubled in taking out the B Main from Prosser and Gowland, with Karl Hoffmans surging from row five to secure the final transfer spot into the main event.

The bronze round of the Pole Shootout saw Kelly and Lines outpace Kratzmann and Woods, and then repeating the effort in the silver showdown against Butler and Farrell. The final showdown against Oldfield and Newton proved a much tougher proposition though, with Oldfield cementing his place at the head of the feature race field. Lines bested Kelly on this occasion to be second quickest, with Kelly to share the second row of the feature race grid with Newton.

Having declined to take the BK Trading Challenge offering extra dollars and additional laps to invert the field, Oldfield launched from pole position and led the field as far as turn two before a multi-car tangle necessitated a restart. Britten Fanning and Lambert would take no further part in proceedings, while Kristy Bonsey and Corbet would resume from the rear. Once underway, the race would be devoid of further interruptions until lap 23 when Kratzmann stopped against the inside wall in the back straight. Until this point in proceedings, Oldfield had enjoyed an untroubled run at the front of the field and the restart offered Lines his only real shot at stealing the lead. After a slow start, Kelly had climbed back to be third at this point ahead of Newton, with B Main transferees Prosser and Hoffmans having stormed through the field to be sitting inside the top five. Oldfield faced no resistance from Lines upon resumption of racing and subsequently held firm at the front through a final restart with three laps remaining that came courtesy of a spin from Brazier in turn three. Oldfield completed the final circulations to secure his fifth ECL series feature win for the season. Lines and Kelly retained possession of the minor placings, with Newton home fourth ahead of Prosser and Hoffmans, the latter having climbed as far as fourth at one stage after starting on the back row. Butler, Corbet, Jensen and Kratzmann rounded out the top ten and, with Woods, Brazier and Farrell failing to go the distance, Gowland and Bonsey were the only other finishers.

The opening heat of TFH Midget action was a romp for Kendall from the front row, the ex-pat Kiwi finishing seven seconds clear of Darren Dillon and Jesse Harris. A spin from Kaidon Brown in turn three would see him collected by Farmer, with both drivers heading infield, to be joined a couple of laps later by Casey O’Connell.

Dylan Menz similarly prevailed from pole position in heat two, albeit by somewhat smaller margin. Scott Doyle advanced from the fourth row to secure second spot ahead of Charlie Brown.

Having already amassed twice as many heat wins as anybody else so far this season, Charlie Brown was at it again in heat three, leading home Lachlan Paulger and Kaidon Brown.

Farmer bounced back to win the final heat ahead of Kendall and Brad Dawson, with Doyle recovering to finish fourth after a clash with Kendall on lap two left him parked on the main straight.

With top qualifier Kendall selecting a four-car inversion for the feature race field, Dillon would find himself on pole position alongside Doyle, with Charlie Brown and Kendall to launch from row two ahead of Dawson and Paulger. When the front row pairing were slow to go at the green, Brown pounced to lead the field away. Dillon held second spot until lap five when Kendall moved ahead and set off in pursuit of Brown. Even with Kendall closing in and applying pressure aplenty, Brown held firm at the front and was looking as though he might be the first two-time winner for the season, only for him to head infield with nine laps remaining and hand the lead to Kendall. Running third before Brown’s demise, Paulger moved into second spot and a podium finish still beckoned even when 14th-starting Kaidon Brown moved ahead just three laps from home. However, when Barry Gibbes spun in turn one with two laps to run, the ensuing restart proved the catalyst for a big finish from Farmer as he rounded up both Paulger and Brown to snatch second spot, leaving Brown third as Paulger found himself shuffled back even further, falling to fifth behind Dillon. Next in line was Menz ahead of Dawson, Tom Clauss and Doyle, with Casey O’Connell completing the top ten, leaving Reid Mackay, Kody Stothard, Harris, Bernie Clarke and Gibbes as the remaining finishers.

Following heat wins to Michael Butcher, Ben Manson, Chris Catchpole and Robert Mazzer, it was the latter who emerged triumphant in the IQ Mechanical Wingless Sprint feature race. In a very close result that saw less than a second between the first three finishers, Mazzer held firm under pressure to secure his third Archerfield feature win for the season, the only driver to visit victory lane on more than one occasion. Jamie Usher chased hard throughout but, with Mazzer glued to the bottom, Usher’s reluctance to chase an alternate line left him unable to find his way to the front. Likewise, Manson and Butcher were within striking distance of the lead but weren’t prepared to risk their positions in search of a faster groove, remaining third and fourth respectively at the chequer, with Steve Pilkington home fifth ahead of James Grady, Tim Harris, Dave Sansby, Ian Milnes and Chris Catchpole.

Starting the night strongly with a heat win, Andrew Kimm went on to claim his fourth feature race success for the season in the Lightning Sprint division, downing Wayne Jukes, Scott Jukes and Kurt Wilson, who is the only other driver to win a feature thus far. Darren Baldwin finagled fifth ahead of Scott Genrich, who started from pole position after also winning a heat, with Wayne Iacono, Michael Gollagher, James Elliott and Sean Icono completing the field.

Shane Munro served up a clean sweep in the Microsprint events, winning both heats and the feature race with a minimum of fuss. Having finished well down the order in the heats, Michael Shearer found some speed in the feature to secure second spot ahead of John Lawson, Matt Hanford and Matt King.

Bailey Leeson won both heat races in Formula 500 Juniors, but it was Cooper Norman who proved too pacey in the final outing. It was another New South Welshman in Kobi Wright who finished second ahead of Daisy Smith, Charlie Bowen and Jai Bateman.

The next event at Archerfield Speedway is on March 6, featuring round 11 of the East Coast Logistics Sprintcar Track Championship and round 12 of the McCosker Super Sedan Series, plus AMCA Nationals, Formula 500s, Compact Speedcars, Stockcars and Open B/Limited Sedans.