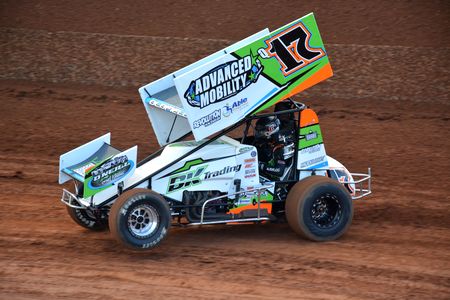 Luke Oldfield continued his winning ways at Archerfield Speedway on Sunday night (January 2), taking out round nine of the East Coast Logistics Sprintcar Track Championship. Even with the advantage of a pole position start in the 35-lap feature race, Australian champion Jamie Veal was unable to deny Oldfield his fourth win for the season, with a third-place finish from Jock Goodyer replicating the podium positions from the previous round just four nights earlier. Whilst the race didn’t reach the heights of others seen at Archerfield this season, Oldfield was faultless in his drive to victory, pouncing on a Veal mistake to grab the lead and then negotiating lapped traffic with patience and precision to leave Veal devoid of any opportuny to reclaim the lead.

In the Dirt Modified Paul Britten 44, Todd Hobson hounded Geoff Phillips through the first half of the annual memorial event before racing into the lead on lap 32 and clearing away to finish more than five seconds clear of Phillips. Chris Corbett finished in third spot ahead of Phil Roberts and national champ Kevin Britten, whose charge came much too late to challenge for the podium, despite the fact that he cut the quickest lap of the race.

Despite the 24 hour postponement of the event as a result of inclement weather on Saturday, a 35-car Sprintcar field fronted on Sunday, with Veal joining the field as a result of the rescheduling, having competed in Warrnambool the previous evening. In time trial qualifying, Goodyer topped the timesheets with a best lap of 11.734 to secure KRE Fast Time. Oldfield (11.741), Lachlan McHugh (11.822) and Brock Hallet (11.873) were next quickest ahead of Veal (11.877). Dave Fanning and Nicholas Whell were the last of the sub-13 second runners, with Trent Vardy, Sam Bylsma and Ryan Newton rounding out the top ten.

Despite a great start from Mark Attard in the opening heat, Hoffmans wasted no time in surging to the lead, which he would maintain until the chequer. A strong finish from McNamara would deliver the closest result of the night as he surged into second spot, with Kratzmann third.

Heat two went to Kevin Titman ahead of Veal and Adam Butler, while heat three produced plenty of drama, the first bit of which came when Nelson Reddecliffe was deemed to have jumped the start, handing pole position to Jye Corbet. Subsequent attempts to get the race underway were thwarted, firstly by a crash from Tarhlea Apelt through turn two and then by a less spectacular exit from Jensen, who came to a halt against the wall in the same spot.

Heat four saw Allan Woods race to the lead almost immediately despite starting third and he was untroubled out front for the duration, leading Newton and Reddecliff to the line.

Mark Attard started strongly again in heat five, leading the opening lap before succumbing to Corbet, who went on to score his second win and climb from the brink of the B Main into Spanloc Dash, with Farrell and Titman the best of the rest.

Starting from the outside front row in heat six, Dan Murray got out of shape in turn one and was hit by McNamara. With Murray out and McNamara at the back for the restart, Morgan proved too swift for the rest, finishing in advance of Kratzmann and Whell.

The first attempt to get the B Main underway was abandoned when Brad Keilar tipped over in turn two, but the second go-round saw Sam Bylsma lead the field through the opening laps. Having started deep in the field, Darren Jensen was charging hard and making gains until he found himself somersaulting though turn two on lap five. At the restart, Morgan pounced to grab the lead, leaving Bylsma susceptible to Reddecliff, who moved into second spot on lap seven. From this point, Bylsma backslid through the field as Adam Butler and Tim Farrell advanced to secure the final transfer spots into the feature, although fifth-placed Karl Hoffmans would also be granted a start. Anthony Lambert climbed from 11th to finish sixth, with Dan Moes, Andrew Baumber, Mark Attard and Bylsma completing the top ten.

Having secured pole position for the Spanloc Dash, McHugh would forego the six lap shootout to facilitate an engine change, confining himself to the fourth row of the grid for the feature and handing Veal the pole slot for the Dash. Not surprisingly, Veal led all the way to retain pole position for the feature, leading home Hallett to set up an all-interstate front row for the main event. Woods finished third ahead of Goodyer, Oldfield, Newton and Corbet.

Veal easily out-sprinted the field to turn one at the commencement of the feature race, with Oldfield having leapfrogged into second spot as the field exited turn two for the first time. The first interruption came on lap six when McNamara stopped in turn four, by which time Hallet had dropped back to fifth behind Oldfield, Woods and Goodyer, although there would be numerous positional swaps in the battle for the final spot on the podium. As so often happens, restarts beget restarts, and that was certainly the case here as Woods, having run high in turn two and desperate to regain lost ground, rode over the front of Goodyer and flipped along the back straight. Underway cleanly next time and Veal maintained his lead until lap 14 when he inexplicably spun the A1 in turn two, allowing both Oldfield and Hallett to slip past as he completed a 360 and continued without bringing the race to a halt, immediately moving back ahead of Hallett. Once in front, Oldfield never looked like losing and would ultimately finish more than five seconds ahead of Veal to join McHugh with four ECL feature wins for the season. Goodyer moved back ahead of Hallett to finish third for the second time in as many rounds, with Titman also deposing the South Australian to finagle fourth. Fanning finished sixth in advance of Kratzmann and McHugh, who was the last runner on the lead lap and was on the cusp of being rounded up by Oldfield when the chequer appeared. Whell was next in line ahead of Kristy Bonsey, who enjoyed her best night of the season and was followed home by Corbet, Hoffmans Newton and Morgan. With Woods the only casualty, the field was rounded out Reddecliff, Farrell, McNamara and Butler.

The postponement of the event did, unfortunately, have a significant impact on competitor numbers for the Dirt Modified Paul Britten 44 and the 17-car field was reduced further when Mitchell Randall somehow crashed in hot laps.

The opening heat was easy work from Kevin Britten from the outside front row, leading home David Clark and Brendan Cherrie,

Hobson also launched from the outside front row in heat two and he cleared away to win easily, finishing more than nine seconds clear of Roberts, with Ray Klarich home third.

Clark clinched heat three in advance of Luke Dunn and Josh Rose, with Robinson downing Phillips and Terry Leerentveld in the final preliminary.

Britten led throughout to win the Dash and promptly accepted the invitation to forgo his pole position start and come from the back of the field in the feature race. Both Robinson and Clark also opted to start rearward and it was somewhat surprising given the small field that Phillips, Hobson and Roberts decided to run from the front, much to the chagrin of the crowd.

Despite the fact they had 44 laps of racing ahead, chaos ensued on the opening lap with a back straight pile-up eliminating Rose, Klarich, Leerentveld and Scott Quirk. The next attempted start was halted when Adam Thomsen spun in turn one. Once racing did commence, it was Phillips who assumed the lead at the green ahead of Corbett and, when Cherrie headed infield on lap three, just 10 cars remained with over 40 laps still to run. Hobson moved ahead of Corbett on lap three, with Robinson quickly on the advance into third after five laps as both Clark and Britten struggled to go forward. It wasn’t until lap 32 that Hobson decided to make his move, shifting uptrack to move around Phillips through turn two and take over the front running. Robinson headed infield on lap 35, moving Corbett back to third ahead of Roberts, with a late surge from Britten carrying him to fifth. With Thomson ordered infield following a second spin on lap 17 and Clark exiting the contest on lap 40, Dunn and Sam Bruggy were the only other finishers.

The Dubbo-based father-son team of Mark and Marshall Blyton completely dominated the Wingless Sprint portion of the program, winning all four heats between them before finishing first and second respectively in the feature race. Determined to make amends for his previous appearance when he looked to have the feature in his keeping until collected by a lapped car, Mark shot straight to the front and remained in command through the 20 laps, his task made easier as Marshall battled a flat left front tyre. Ben Manson occupied third spot until a spin from Corey O’Toole bunched the field for a restart with four laps remaining. As the field headed into turn one to resume racing, contact between Manson and fourth-placed Michael Butcher put both drivers out of action and elevated Jayden O’Toole into third. Even with his impediment, Marshall Blyton was able to follow his last-start win with a runner-up result. Behind O’Toole in fourth was Steve Pilkington, trailed by Peter Granger, Andrew Seery and Robert Mazzer, who advanced from 15th after starting deep in the field in both heats, with Kevin Willis, Lachlan Robertson and Scott Thomsen rounding out the top ten.

After a somewhat sedate opening heat for Lightning Sprints that went to Tyler Stralow over Darren Baldwin and Keith Blatch, the second heat was a messy affair that saw half the field fail to go the distance as Kurt Wilson downed Stralow and Blatch, the most serious incident resulting in Andy Kimm getting upside down. To their credit, all cars were back on track for the feature race, but the result was the same with Wilson leading home Stralow and Blatch. Having taken out the previous round, Kimm finished fourth on this occasion, with Scott Jukes and Scott Genrich behind him. The remainder of the top ten, and the only other finishers, were Darren Baldwin, Wayne Jukes, Wayne Iacono and Luke Graham.

Following heat wins to Shaun Donnelly and Ben Harris, it was the Commodore-mounted Harris who backed up to take out the Open B/Limited Sedan feature race in front of a trio of Falcons piloted by Mark Anderson, Hayden Grantz and Nathan Lowe, with the EH Holden of Anthony Harrison keeping pace the more contemporary models to finish fifth. .

The next meeting at Archerfield Speedway is Wednesday night (January 5) featuring the opening round of the Speedway Australia Sprintcar States Series, with 40 drivers from across Australia amongst the nominations. Also on the program will be the annual Modified Sedan Firecracker, along with Compact Speedcars and Formula 500 Juniors.