O’Keeffe thanks supporters for career-best season

O’Keeffe thanks supporters for career-best season 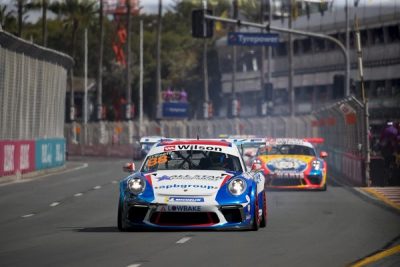 Dylan O’Keeffe has thanked his team, family and sponsors for his most successful season yet, securing a top-three result in the Porsche Wilson Security Carrera Cup Australia standings despite a tough weekend on the streets of the Gold Coast.

After qualifying ninth, O’Keeffe’s APB Group Porsche sustained a flat tyre in Race 1, which pitched him into the wall and ended his race.

Race 2 was progressing well for O’Keeffe; he worked his was from 23rd on the grid to 15th within the first four laps, before a tangle with another competitor relegated him to 19th at the chequered flag.

A determined O’Keeffe charged from 19th to 11th in the weekend’s third and final race, despite a late Safety Car restricting his opportunity to make up further places.

“In qualifying, we were caught in traffic after we changed onto our second set of tyres, and by the time we found clear track, the session was red-flagged,” O’Keeffe said.

“In Race 1 I had a brush with James Moffat in the first corner which caused a slow puncture, and I lost steering and fired into the fence on the second lap when it let go.

“In Race 2, I tangled with Pete Major at Turn 4 and lost all the spots I gained in the opening laps.

“Race 3 was a more positive way to finish the weekend – the car was handling well and I was able to make up positions without taking too many risks. I could have overtaken a few more cars if it hadn’t finished under Safety Car conditions.”

After a season where he scored two race wins and 11 top three finishes, O’Keeffe declared 2018 as the strongest of his career.

“Overall, it was a really good season, especially the middle part of the year where we won a round at Darwin and a couple of races at Sydney Motorsport Park. Winning the Asia v Australia race was a particular highlight.

“We didn’t qualify as well as we needed to in the last couple of rounds, which ultimately cost us a shot at the title, but all-in-all it’s been a positive season where we’ve shown we can race at the very pointy end.

“Now I’m looking forward to the Porsche Junior Programme Shootout, which will be a great way to finish the year,” O’Keeffe concluded.