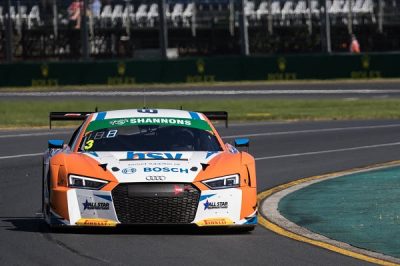 Wilson Security Porsche Carrera Cup Australia front-runner Dylan O’Keeffe is playing down the potential advantages of track knowledge he will gain by competing in Round 2 of the Australian GT Championship at the brand-new Tailem Bend circuit this weekend.

The APB Group-backed driver will join Ash Samadi in the HSY Autoparts Audi R8, and it will be the first of two visits O’Keeffe will make to the state-of-the-art South Australian motorsport complex in 2018, as he will also compete in the Carrera Cup round in August.

“To be honest, I don’t think racing at Tailem Bend this weekend will give me that much of an advantage when I go back there later in the year,” O’Keeffe said.

“For a start, we’ll be using a different track configuration – this weekend, we’re racing on the full GT Circuit, whereas in August we’ll be on the shorter International Circuit.

“Also, the Audi is a very different car to drive, compared to the Porsche. As well as being more aero-sensitive, it also has a lot more driver aids such as traction control and ABS, that make it a much more forgiving car to drive.”

O’Keeffe says he’ll be calling on some of the techniques he learned during his go-karting days to learn the track.

“Unlike other tracks I’ve visited, this circuit has no simulator data or on-board footage I can use to learn it before I arrive, so I’ll need to go back to first principles – studying the track map, estimating what the racing lines are likely to be, and then working out the finer details during practice and qualifying,” O’Keeffe said.

“It’s also going to be important to give Ash plenty of time to get comfortable with the track, so we’ll be working very closely together and trying to learn as much as we can from one another. There is 7.7km and 35 corners to learn, so our best approach might be to divide and conquer!”

The round also features a unique, split format; the first 24 laps will be held on Saturday evening (with one compulsory pit stop) and the remaining 44 laps will take place on Sunday (with two compulsory stops).

“The important thing will be to complete the Saturday stage of the race on the lead lap, and then go for glory on Sunday,” O’Keeffe said.

The Sunday portion of the race will be live streamed via the Shannons Nationals website, while a post-produced highlights package will be shown on SBS Speedweek in the weeks following the event.