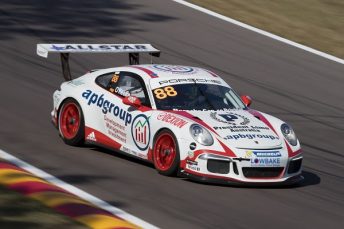 O’Keeffe is looking forward to the challenge of racing on a new circuit.

“I’m excited to be racing on a different track, and making my first trip overseas to go racing,” O’Keeffe said.

“It’s a Formula 1-standard track and has an interesting mix of corners, so it will be a challenge for all of us.

“When the Carrera Cup Asia drivers came and raced against us at Sydney Motorsport Park last year, we had a lot of fun – now we have the chance to try and beat them in their home territory!”

O’Keeffe is seventh in the Carrera Cup standings but is just 67 points behind his Ash Seward Motorsport team-mate Alex Davison, who sits third in the points.

“There are still four rounds to go and still a lot to play out – I’ll be aiming to work my way up the points table for sure,” O’Keeffe said.