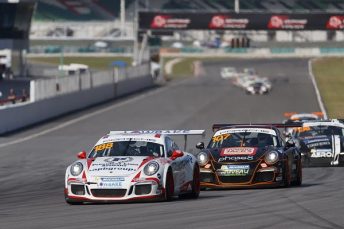 Dylan O’Keeffe has driven his APB Group/President Limo Porsche 911 GT3 to career-best race and round results, finishing second overall in Round 5 of the Porsche Carrera Cup Australia series at Malaysia’s Sepang Circuit this weekend.

O’Keeffe qualified fourth, and after a slow start in Race 1 he charged back to the front of the field, motoring his way past rivals Andre Heimgartner and Cameron McConville to finish third.

He went even better in Race 2; he slotted into fourth position but skilfully avoided a couple of incidents to finish in second place.

In the third non-points race, featuring a contest between the Carrera Cup Australia and Carrera Cup Asia competitors, O’Keeffe finished third-best of the Aussie drivers and seventh outright.

“Sepang was a challenging track to learn, because every corner is technical and they’re all completely different,” O’Keeffe said.

“The hard work we put in on the simulator before the event certainly paid off, as did the efforts of the Ash Seward Motorsport team in coming up with a workable setup.

“I made a slow start in Race 1, but it was encouraging to then be able to overtake people in a category where the cars are so evenly matched.

“In Race 2, there were people spinning out everywhere so I concentrated on staying out of trouble, which worked to our advantage.

“It was a lot of fun to race against the Carrera Cup Asia drivers in Race 3 – they’re just as competitive as the Aussies and there were some close battles.”

O’Keeffe’s excellent weekend has elevated him from seventh to fourth in the points, with three rounds remaining.