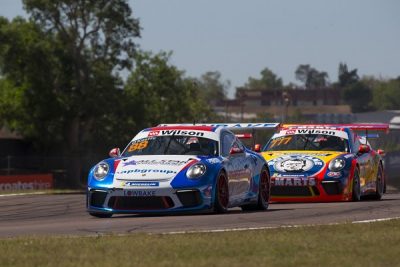 APB Group Carrera Cup racer Dylan O’Keeffe says his focus is firmly set on challenging for the Porsche Wilson Security Carrera Cup Australia title, starting with Round 5 of the series at Sydney Motorsport Park this weekend.

O’Keeffe’s overall victory in the most recent round at Hidden Valley drew him within 60 points of leader Jaxon Evans, and the 20-year-old Melbourne racer is ready for a serious contest.

“In previous rounds, I had probably been a bit conservative when I was racing closely with other drivers but in Darwin, I went wheel-to-wheel with Jaxon and came out on top – that gives me some good confidence for the last four rounds,” O’Keeffe said.

“We’ve had a fast car all year – the Ash Seward Motorsport team have done a great job – and it was awesome to score my first round win in Darwin.”

O’Keeffe participated in the official Porsche test day at SMP a fortnight ago, along with the majority of the field, and set the fastest overall time for the day.

“The mid-season test was a good chance for us to experiment with some setup adjustments and see how the car performed over a longer run,” O’Keeffe said.

“While it was good to end up with the fastest time, we’re not reading too much into it, because we don’t know what everyone else’s tyre condition was like.

“The track conditions at SMP are very changeable, so it’s not simply a case of coming up with a setup in testing and dialling it into the car for the race meeting, we still have to think on our feet.”

Adding some spice to this weekend’s round will be the addition of Carrera Cup Asia; the Australia and Asia drivers will compete separately in the weekend’s first two races, before going head-to-head in the final.

“The Australia v Asia race will be fiercely contested, because there’s national pride on the line,” O’Keeffe said.

“It will also be held under lights just before the Supercar race, so it will be very spectacular to watch.”