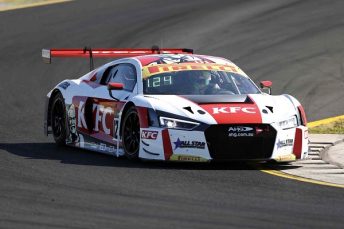 Dylan O’Keeffe has impressed in his debut Australian Endurance Championship race, finishing fourth alongside Daniel Gaunt in Round 2 of the championship at Sydney Motorsport Park on Saturday aboard the KFC Audi Sport Customer Racing R8 LMS GT3.

O’Keeffe and Gaunt started out of sixth position, with the grid based on combined times from Friday’s two qualifying sessions.

O’Keeffe started the race and skilfully avoided a major incident for Scott Taylor at the start of the second lap, before settling into a top five position.

As pit-stops played out, O’Keeffe elevated the Audi to second place and was closing on the race-leading Liam Talbot/John Martin Porsche before pitting to hand over to Gaunt after 59 laps.

Gaunt pitted for the car’s second compulsory pit stop on lap 73, falling to eighth but climbing back to fourth by the chequered flag.

O’Keeffe was satisfied with his maiden AEC outing.

“In the opening stint, I had to deal with a fair bit of traffic in the first 20 laps or so, and in these cars it’s not easy to overtake,” O’Keeffe said.

“Once I got some clear track, I was able to set consistent lap times and towards the end of my stint, I was managing fuel but I was still able to close on the Porsche.

“Overall, it was a happy weekend – I really enjoy these longer races and the Audi is a beautiful car to drive.

“Daniel did a really good job in the last stint – we had a long stationary time for our compulsory pit stop which left him with a lot of work to do, but he was still able to drive up to fourth.”

O’Keeffe returns to his APB Group/President Limo Porsche for the next round of the Porsche Carrera Cup at Sandown, 15-17 September.