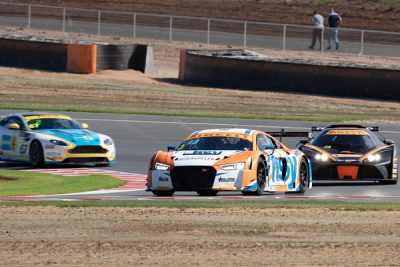 Dylan O’Keeffe will be reunited with Ash Samadi for the second round of the Australian Endurance Championship at Phillip Island pic: GSG Images

APB Group racer Dylan O’Keeffe rates the field for this weekend’s second round of the Australian Endurance Championship at Phillip Island as one of the strongest he has ever raced amongst.

O’Keeffe will again join Ash Samadi in the HSY Autoparts Audi R8, after finishing ninth outright in the opening AEC round at Tailem Bend.

“Not only is it a big field this weekend, but it’s a high quality one as well, with drivers such as Garth Tander and Shane Van Gisbergen in the mix,” O’Keeffe said.

“At Tailem Bend, I had a good battle with SVG which was a real thrill – you learn a lot when you’re racing against drivers at that level.”

With the twin-driver endurance format, O’Keeffe said his responsibilities extend to more than just the driving.

“While it’s obviously important for me to maximise my on-track performance, it’s also critical for me to assist Ash with developing his driving technique,” O’Keeffe said.

“For Ash, racing is a hobby rather than a profession, but he still wants to do as well as he can. In between sessions he will be spending a lot of time with me, studying data and figuring out where he can improve.

“Working with Ash has actually been good for my driving as well – it’s made me think about my own approach to getting the best out of the car.

“There are three compulsory pit stops in the race, and the most likely scenario is that Ash will start the race and hand over to me for the run home.

“With the maximum/minimum driving distance rules, he needs to do at least 46 laps in the car – if he can do a good job during his stint and give the car to me in a competitive position, it has the potential to make a big difference to our finishing result.”