Offroaders to fly in the forest

Offroaders to fly in the forest

Millicent, on South Australia’s Limestone Coast comes alive on September 20-22, with over 80 of Australia’s top offroad racers hitting the track for the Teagle Excavations ARB Pines Enduro. Held amongst the tall pine trees of the Tantanoola Pine Forest and based out of the stadium style arena at Teagle’s Quarry, the event is the third and final round of the 2019 ARB Australian Off Road Racing Championship. 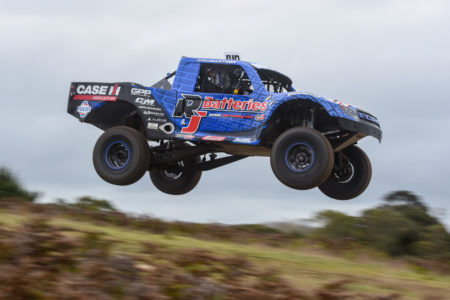 Leading the charge amongst the 80 strong field will be three time Pines winner, Matt Hanson who will be targeting back to back victories in his #7 SMU Jimco. While home grown favourite, Garry Turnbull who was third outright in 2018 will debut his new V8 powered Jimco at the event. The pressure will be on at the front with a talented pack of Unlimited and Class 1 buggies including Aaron James, Clayton Chapman, Craig Martin, Raana Horan and 2018 ARB AORRC Champion Brent Martin all hungry for the outright win. While the thumping V8 powered Class 4 trucks of Greg Gartner, Luke Hall and Damien Nicol to name just a few will be aiming to keep the buggies on their toes.

Alongside Turnbull and Gartner, Andy Murdock and Todd Lehmann will be flying the flag high for the locals. Since making the switch from a truck to his new #66 Element Buggy, Murdock has notched up two outright wins this season. While Lehmann will hit the track in his #85 Jimco as the defending South Australian Champion.

Sitting on top of the leaderboard heading into the final round of the 2019 ARB Australian Off Road Racing Championship is North Queensland’s Talbot Cox. With an outright win already under his belt at the opening round of the season, Cox will be keeping his eye on the prize when he stands on the gas in his Toyota V8 powered Racer. Hot on his heels at the business end of the championship will be the twin turbo V6 #57 Element of Aaron Haby, fresh from a second outright performance at the Gundy 400 and the #1087 Class Ten Tatum of Dean Meginley who has been punching well above his weight bracket this season. While #1 Brent Martin, #225 Rhett Standen, #351 Steven Orr, #402 Paul Grant, #501 Bernie Clohesy, #697 Phil Lovett, #733 Sandy Bowman, #815 Stuart Chapman and #1008 Daniel Wells will all be aiming to lock down their respective class championships at the Pines.

Saturday’s format continues to be one of the highlights on the Australian Off Road Racing calendar, as the high octane machinery locks horns at Teagle’s Quarry, located on the Princes Hwy at the edge of Millicent. At 10am the drivers fire up their engines in anger for the Hards Transport Services Prologue to determine the starting order, unleashing the horsepower and showcasing their skill over the big jumps and sweeping bends. The entertainment continues with the short course racing which follows, where the stadium style arena hosts the exciting 4 lap heats, with the wheel to wheel racing guaranteed to keep the spectators on the edge of their seats.

Saturday’s program also provides the rare opportunity for one lucky spectator to pull on a helmet, tighten up the seat belts and go for a hot lap of Teagle’s Quarry alongside one of Australia’s top offroad drivers. Make sure you are trackside on Saturday for your chance to jump in the hottest seat in town.

On Sunday morning the forest awakens to the crescendo of buggies, trucks and 4wds opening their throttles wide as they set off on six laps of the 60km course through the Tantanoola Pine Forest from 8:30am. Starting two at a time from Teagle’s Quarry, it’s not only the initial drag race, fast tree lined straights or blind crests that gets the heart pumping. A reverse grid format, unique to the Pines ensures a lively day of racing for the drivers and spectators alike, as the fastest competitor on Saturday is the last to receive the green. With little dust to contend with, wheel to wheel racing comes to the fore as the drivers charge through the field and battle it out over the next 360km for the 2019 Teagle Excavations ARB Pines Enduro title.