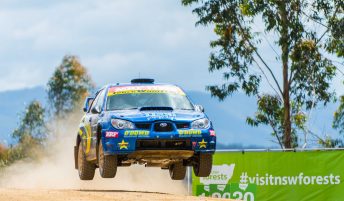 O’Dowd and Sheil were also the third-fastest ARC competitors at the world-stage event and finished third in the national championship for the year.

Given it was their first time at Kennards Hire Rally Australia, the pair took a cautious approach to the event.

“We couldn’t push too hard in some places, because we had to manage the tyres and make sure we got to the end of the event,” O’Dowd said.

“Looking at the roads during reconnaissance, I had visions of us changing tyres all weekend, because we didn’t know how much the road were going to get cut up from the World Rally Championship cars going through.”

Kennards Hire Rally Australia featured the longest stage the pair had competed in, at almost 49 kilometres.

“The long stage was challenging, but I enjoyed it,” O’Dowd said. “I liked all the stages, even though they were tough.”

While many competitors had off-road excursions in the demanding conditions of Kennards Hire Rally Australia, O’Dowd was able to negotiate through an incident-free event.

“We changed the ride height of the car after the first day and that helped with the rough roads,” O’Dowd said.

“We also changed from a medium tyre to a soft tyre for the final day.”

“In general, the car performed really well and, as always, Ken was spot on with the notes,” he said.

O’Dowd finished the first day of the three-day event in eight place in the ARC competition and already ahead of the ARC2 division.

He maintained his ARC2 lead and moved up to fourth in the ARC at the end of day two, before taking third place in the ARC competition for the event.

“We exceeded our own expectations at Rally Australia and I’m really proud of what we achieved,” O’Dowd said.

“Ken and I had a ball and we can’t wait to go back next year.”

O’Dowd received overwhelming support from his home state and said: “We had lots of calls and messages from WA – so a big ‘thank you’ to everyone for that.”

“Also thanks to Maximum Motorsport who did a great job all year and our loyal sponsors – Knightcorp Insurance, Pacific Finance, Truck Wholesale WA, O’Dowd Transport and Rent WA.”

While the success of 2017 is still settling in, O’Dowd said he can’t wait to see what he and Sheil can achieve next year.