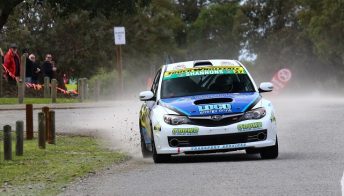 “That car has some great history with tarmac rallying and it was a privilege to be the only other person who’s driven it in competition,” O’Dowd said.

While conditions for Quit Targa West, which included more than 240 competitive kilometres over 34 stages in Perth, the hills and Toodyay, were challenging, O’Dowd said the car ran like a dream.

“Our main consideration for the event was tyre choice, because it was raining on and off all weekend,” O’Dowd said.

“The first day, we had stages in Wanneroo and Malaga and it was about getting a feel for the car, but after that my confidence grew.”

Quit Targa West headed to Toodyay and Bullsbrook on Saturday where the stages were fast and flowing.

“I think those were the stages that best suited the car and my driving style,” O’Dowd said. “There were some surface changes in there too, which was a good challenge.”

O’Dowd, whose regular co-driver Ken Sheil was unavailable for Quit Targa West because of work commitments, was joined in the Subaru by Philip Conneely.

“I’ve done a few events, including Targa West, with Philip before and he’s got a lot of co-driving experience,” O’Dowd said.

“We worked really well together and his delivery of the pace notes was excellent.”

Heading into the final day of competition, O’Dowd was locked in a battle with fellow hills resident, Tim Wolfe from Kalamunda, who drove a Porsche 911 GT3 RS.

“We had a great battle with Tim,” O’Dowd said. “We went into Sunday morning’s tight and technical Malaga stages 26 seconds behind him, but after the three runs, we were 21 seconds in front.”

After the final stages on Riverside Drive, by the iconic Swan River, O’Dowd was thrilled to claim seventh in the modern competition of the event.

O’Dowd, will now turn his focus back to gravel rallying as he prepares to tackle round five of the CAMS Onslow Contracting WA Rally Championship, the Wheels On Yirrigan Kumho Tyre Kirup Stages on September 9.

O’Dowd is second in the race for the 2017 championship. He’s also testing the waters in the CAMS Australian Rally Championship and, just a week later, will head interstate for the Lightforce Rally SA.