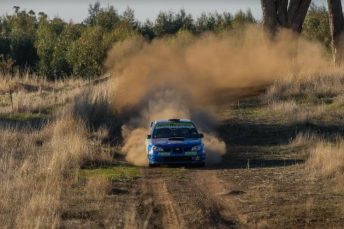 John O’Dowd is set to battle with WA’s best rally drivers at the Make Smoking History Experts Cup in Collie on Saturday, July 8.

The event is round four of the CAMS Onslow Contracting WA Rally Championship and O’Dowd is seeking redemption after a frustrating last round, the MRF Boddington Rally at the start of June.

He and co-driver Ken Sheil were third fastest over the events forest stages in their Subaru Impreza WRX STI, but were controversially penalised one minute for a ‘checking in’ error on the events first time control.

“We strongly deny that we made a mistake,” O’Dowd said.

“We had substantial evidence, including on board vision, to support our case, and we submitted an official protest, but disappointingly, it was disregarded without any of the evidence being reviewed.”

The penalty cost O’Dowd a podium finish at the Boddington event and second spot on the championship leaderboard.

“We’re now fourth in the championship,” O’Dowd said, “But it’s close and we’re determined to make up for it in Collie.”

The Make Smoking History Experts Cup covers about 130 kilometres of fast roads around Collie and the Wellington Dam and it’s an event O’Dowd is very familiar with.

“I’ve run at this event many times, so I know the roads well,” he said.

“It features your typical south-west, clay-based surface, which will be quite slippery if it rains.”

O’Dowd expects to be in a tight battle with Michael Steele and Stephen Oxley who sit just above him on the points score.

He’ll also be joined by Maximum Motorsport team mate Brad Markovic who, with a long break between CAMS Australian Rally Championship events, is keeping the seat in his Subaru WRX STI warm.

“This will be a really enjoyable event and we’re looking forward to getting out there,” O’Dowd said.