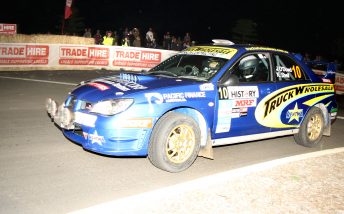 O’Dowd’s Subaru WRX STI suffered power steering issues throughout the event, which was run around Busselton and Nannup at the weekend. It created challenging conditions for the talented driver.

“A steering issue will always be in the back of your mind,” he said. “It’s not a very comfortable feeling knowing the steering isn’t right.”

O’Dowd praised the Maximum Motorsport team for keeping the car in the game.

“They did a fantastic job,” he said.

O’Dowd said he and co-driver Ken Sheil went out on Sunday afternoon and tried to make up for lost time: “We had a good few stages after that.”

Despite the problems, O’Dowd and co-driver Ken Sheil’s times were still amongst the top five for WA competitors for more than half of the stages.

The Make Smoking History Forest Rally is well-known as a challenging event and O’Dowd said it was an achievement to cross the finish line.

“The past two times I’ve competed here, I haven’t finished. So it feels pretty good to make it to get through it all.”

O’Dowd’s next outing is the FIA APRC National Capital Rally in Canberra in a month.

The event is a round of both the ARC and the Wurth FIA Asia Pacific Rally Championship.

“It’s a new rally for me and there’ll be some great drivers from Australia and overseas,” O’Dowd said.

“Our goal will be to again get to the finish, get some great experience and see if we can grab some more points.”