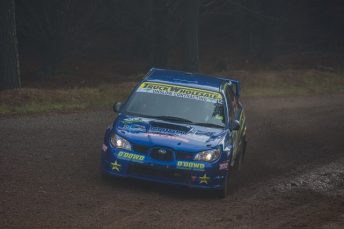 This weekend, just one week after sharing the roads with some of the world’s best drivers at the National Capital Rally in Canberra, WA’s John O’Dowd will be back competing on home soil.

He and co-driver Ken Sheil finished 10th in APRC competition of the National Capital Rally. They were also 10th in the CAMS Australian Rally Championship section of the event.

“That was the biggest rally so far in my career,” O’Dowd said. “It was really about getting experience and testing ourselves.”

“We’re really happy with how we did on unfamiliar roads, especially considering this is Ken and my first year competing together.”

O’Dowd’s said his Subaru WRX STI handled ‘beautifully’ over the rough roads in Canberra, but developed an electrical issue early in Heat Two.

“The electronic centre diff stopped working after the first stage on Sunday,” O’Dowd said. “It meant we lost some of the four-wheel-drive traction, so we had to be mindful of that.”

Rain on Sunday meant the stages were slippery, but O’Dowd said he was happy to get through the event and keep the car on the road.

While the Maximum Motorsport team is working on fixing the car’s electrical issue ahead of the MRF Boddington Rally, O’Dowd is looking forward to competing back at ‘home’.

“I’m hoping the experience in Canberra pushes me to step up a level with my driving,” he said.

The MRF Boddington Rally starts at midday on Sunday.