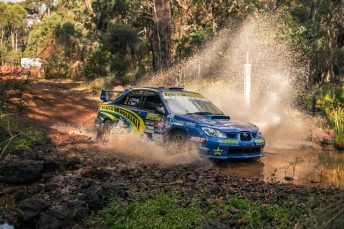 John O’Dowd remains one of the strongest contenders for the 2017 CAMS Onslow Contracting WA Rally Championship, as he prepares to tackle round five, the Wheels On Yirrigan Kumho Tyre Kirup Stages, near Balingup next weekend.

Ahead of the second last event of the season, he and co-driver Ken Sheil are second on the championship leaderboard.

“We’re still within striking distance of the title,” O’Dowd said. “So it’s really important we do well in this event.”

O’Dowd and Sheil had their best result of the 2017 WARC season at the previous round, the Make Smoking History Experts Cup around Collie in July, where they finished second in their Subaru WRX STI.

“That was our third podium finish for the year and, even though there’s been a big gap between WARC rounds, we’re keen to pick up where we left off,” O’Dowd said.

“It’s a fast event and our main concern will be getting our pacenotes just right,” O’Dowd said.

The weekend after the event, O’Dowd and Sheil, will head to Adelaide for the Lightforce Rally SA, which is round four of the CAMS Australian Rally Championship.

“We’re continuing to test the waters in the national championship because that’s where we want to compete next year,” O’Dowd said.

“Targa West was a great challenge and I’m thrilled with how I did, but I’m keen to get back out on the gravel,” O’Dowd said.

The Wheels On Yirrigan Kumho Tyre Kirup Stages starts at 1pm on Saturday, September 9 from the Jim MacDonald Oval on South West Highway in Kirup.