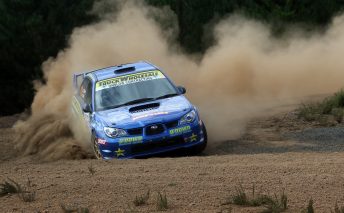 WA’s John O’Dowd will line up with drivers from India, Finland and Japan when he heads to Canberra for the National Capital Rally (May 26-28).

O’Dowd has entered the APRC section of the event and said: “It’s really exciting because ARC is the highest tier I’ve done up until now.”

“It’s a huge opportunity and I’m really excited about sharing the roads with some very talented international drivers.”

Competing in their first season together, they successfully ran at the ARC level of the Eureka Rally in Ballarat and the Make Smoking History Forest Rally in WA’s south-west.

“We’ve got a goal of competing in all ARC events next season, so we’re getting some great experience now,” O’Dowd said.

“Our primary concern for this year, however, is claiming the WA state title.”

The weekend after the National Capital Rally, O’Dowd and Sheil will contest round three of the CAMS Onslow Contracting WA Rally Championship, the MRF Boddington Rally.

“It’s going to be a quick turnaround, but with good points on the board from the opening two rounds, it’s an event we can’t afford to miss.” O’Dowd said.

The National Capital Rally kicks off with a ceremonial start on Friday May 26 before heading out into Canberra’s forests the following day.