Following a competitive runner-up finish last season, Cody O’Connell has this season managed to go one better in the overall Ian Boettcher Race Parts Wingless Sprint Super Series point standings, earning his place at the top of the leaderboard and pocketing a substantial $5,000 reward for his efforts. 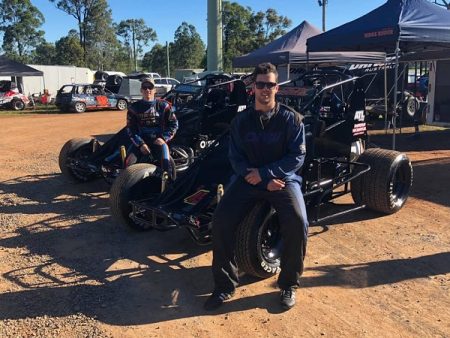 While he hasn’t quite been able to top his whopping six feature-race wins from last season, consistency has never been in doubt for the 19-year-old driver, who collected a handful of minor podium finishes throughout the season, along with delivering a fighting performance during the Australian Championship at Warrnambool’s Premier Speedway to win the C main.

Bringing the curtain down on his third season in Wingless Sprints at Brisbane’s Archerfield Speedway recently, it was O’Connell’s performance during the 50 Lapper, which doubled as the final Ian Boettcher Race Parts Super Series round, that cemented his front-running position in the point standings.

Qualifying on the outside of the front row for the 50-lap feature race aboard his Qld # 49 Tranzmile – Wacol backed Cool car, O’Connell immediately powered into the lead, where he remained for the next 18 laps until his position was threatened when he became involved in a racing incident with another competitor.

Thankfully able to retain his position, O’Connell held strong out in front until lap 25 when he fell victim to the advances of David Eggins, who pipped him for first place. Knowing that the Ian Boettcher Race Parts Super Series was at stake and not wanting to risk a loss of points, O’Connell maintained his composure and drove carefully, eventually being passed for second place by Brant Chandler, going on to cross the finish line in third.

Not only did the Tivoli, Queensland-based racer do enough to clinch the top spot in the Ian Boettcher Race Parts Super Series, his competitive 2018-19 season campaign also saw him place second in the overall Queensland Club Championship.

“I would have loved to close out my season with the 50 Lapper win, but to come out on top of the Super Series is a massive accomplishment for the entire team and with so much competition throughout the season, it definitely wasn’t an easy one to win,” admitted O’Connell.

“I’m also really grateful for the prize money that comes with it. My family puts in a massive amount of work throughout the season to allow me and my brother (Casey) to race, so to be able to repay them a little bit is a great feeling.”

Casey, the younger of the O’Connell brothers, joined his older brother Cody at the Speedway Australia Rising Star Program earlier in the season.

Undergoing high intensity learning throughout the four-day camp that takes place in Canberra, the brothers gained invaluable knowledge on all facets of competitive racing, including how to conduct yourself as a driver, both at the track and away from it, psychology in sport, nutrition, marketing, physical fitness and much more.

Equipped with this new knowledge and appreciation of speedway, the O’Connell siblings will now begin preparations for next season, which will include a similar schedule of race meetings throughout their home state of Queensland, along with numerous blue-ribbon events.