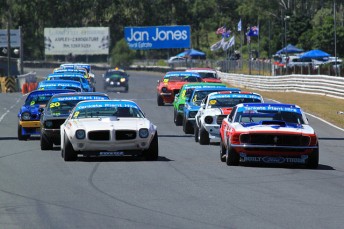 Former Australian Touring Car driver Charlie O’Brien enjoyed his first outing with the Australian Trans-Am series, with the debutant clean sweeping the last three races of the weekend, on his way to taking home the first round win for 2015 at Lakeside Park.

Defending series champion Craig Harris (Ford Mustang) started 2015 where he left off, with a blistering 59.22 second lap to claim pole position, only six hundredths of a second ahead of O’Brien (Pontiac Firebird) who completed an all Fataz-powered front row, ahead of Ian Palmer (Plymouth AAR Cuda) and Brett Curran (Ford Mustang).

Harris lead from start to finish to claim the first race win for the year, narrowly fighting off O’Brien as the pair raced ‘Bumpa T Bumpa’ for the full ten laps ahead of Curran who impressed in third.

O’Brien fought hard for the race lead again in Race Two and passed Harris through Lakeside’s infamous kink, and drove onto earn his maiden victory in the category and his first at the famed circuit for 40 years.

Harris took the lead from O’Brien on the opening lap of Race Three, before O’Brien broke deep broke into the Carousel on lap five and overtook Harris, and built a five second gap by the chequered flag.

Curran dropped back to seventh on the final lap after coming to a halt as he crossed the finish line with engine dramas that retired him from the final race.

O’Brien was pleased with his first outing in the series.

“A second and three race wins in a row is a pretty fine weekend, many thanks to Ian and Kaye Woodward for giving me a great car to do it in… I still have the enthusiasm and to enjoy it as much as I do, i’ll be here for a long time yet,” said O’Brien.

The second round of the series will see Australian Trans-Am return to Morgan Park Raceway in Warwick for the Autumn Historic meeting in early May.

Other results from the Lakeside Tribute saw the XU1 Torana combination of Peter Baguley and Bruce Dummett sharing the honours with two-wins a piece in the Historic Touring Cars, and Phillip Holzberger (Radical SR8) clean-sweeping the Queensland Sports Car Championship with four wins.

Aarron Hodges debuted his DJR Shell lookalike Ford Sierra with a race win before Brett Kennedy (Commodore) completed a hat-trick in the Queensland Touring Car Championship, while Michael Kulig (NASCAR Monte Carlo) won the opening race of the Classic Sports Sedans before a coming together with the Porsche GT3 of Darren Hennig under the Lakeside bridge in Race 2, with Sam Collins (Nissan Silvia) and Stephen Annett (Corvette) clinching the remaining race wins.