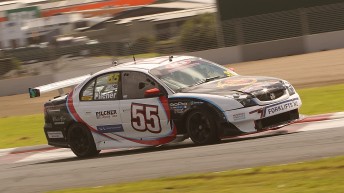 If last year is anything to go by when the NZV8 Touring Cars hit Invercargill’s Teretonga Park this
weekend there will be plenty of rumble and tumble action for all to see.

Now at the halfway point of their season the pressure is on for race wins and maximum points as the end of the title chase comes into view and where the point differences between drivers become more and more significant. 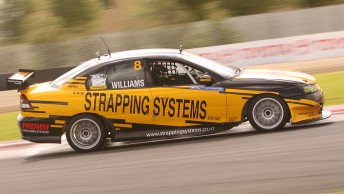 And just last weekend the youngster placed third overall at the Mike Pero Motorsport Park, Ruapuna in Christchurch and appears to be in fine form driving the 2011­12 championship winning Ford Falcon of Angus Fogg.

Another local driver Grant Molloy grabbed everyone’s attention last year at Teretonga when he and Auckland driver Shaun Varney went hurtling down the main straight at full speed but sideways after being caught up in a multiple car incident. 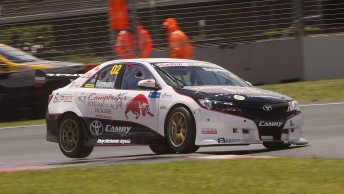 Fortunately and a credit to safety precautions there were no injuries to any of the drivers or spectators but gave an exciting spectacle for the viewing fans adding to the weekend’s V8 powered thrills.

Molloy ran a strong campaign last year finishing sixth even when unable to compete at Manfeild but has missed the first two rounds of this season catching up with the series just last weekend at Ruapuna.

Nathan Pilcher from Winton is another Southlander who has been competing well in this his first full season and currently sits in fifth place in the championship. 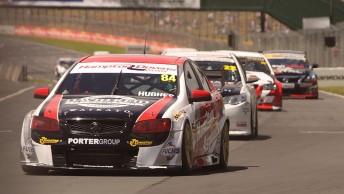 Auckland’s Kevin Williams is leading at the halfway point of the NZV8 Touring Cars TL Championship ahead of Queensland based kiwi Craig Baird and Hamilton’s Steve Taylor.

Both Williams and Bargwanna are on quite the winning streak with each driver claiming the past two round wins in their respective categories with clean sweeps of three race wins from both Pukekohe and Ruapuna.

This weekend promises to be an exciting one with some solid competition throughout the field and also between the local drivers who will be closely matched.

For the leading drivers in the two categories there will be much heat put on them with both having very stiff rivals on their tails.

Returning to the series and now driving a Holden TL for Team Kiwi Racing, iconic driver Craig Baird was leading the title chase after the first round at Hampton Downs only to have it snatched away from him at Pukekohe after suffering a drivethrough and a time penalty in two of the three races.

Last weekend at Ruapuna TKR were forced to change engines in the Holden TL leaving Baird out of race one and contesting the other two races with an engine producing less power than their number one powerplant.

He was unable to secure any race wins from the weekend and now trails Williams in the NZV8 Touring Cars TL Championship by 139 points.

In the NZV8 TLX category Toyota driver Bargwanna and Nissan driver Nick Ross continue to fight tooth and nail over the title, a stiff rivalry which has continued race by race, round by round since the inaugural season of the New Generation TLX cars in 2013.

Both drivers have won the title after two completed seasons but it is Bargwanna that has the upper hand at the halfway point this time around.

Bargwanna’s Toyota has been slightly quicker than the brand new Nissan something that the Concept Motorsport team are working hard on in their first season with the car after moving from their championship winnning Holden.

In his rookie year Australian driver and Bargwanna’s team mate Scott Taylor sits in fourth place after missing the opening round and made the podium for the first time placing third last weekend at Ruapuna.

The NZV8 Touring Cars action gets underway at Teretonga Park this Saturday the 24th January at 11.40am with a qualification session followed by their first race of the weekend with a 12 lap sprint starting at 3.30pm.

On Sunday the V8 powered action continues with a top five reverse grid 14 lap race at 11.24am and then the final NZV8 Touring Cars race of the weekend starts at 3.59pm and is 22 laps including a mandatory wheel change for the TLX cars.