NZV8 Touring Cars Head to Manfeild for penultimate round

NZV8 Touring Cars Head to Manfeild for penultimate round 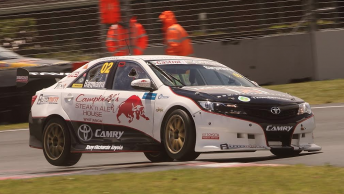 Next weekend sees the fifth and penultimate round of the NZV8 Touring Cars when the series heads to Manfeild Autocourse in Feilding 13-15 February to participate in the 60th celebration of the New Zealand Grand Prix.

The action in the NZV8 Touring Cars will not only be hotting up as they near the end of their season but the large field will also be competing for the Jason Richards Memorial Trophy over the weekend while the Toyota Racing Series contests their prestigious 60th running of the NZGP.

Auckland driver Kevin Williams has pulled an extensive lead on the other drivers in the TL category helped somewhat by the misfortune of Craig Baird and Team Kiwi Racing who missed four of the six races held in the South Island last month due to engine issues.

Revitalised and back on their game upon their return to the North Island both Baird and TKR are expected to be on the pace next weekend and pushing hard on recovering some of the distance between them and Williams which currently stands at 884 points to 520.

Williams could quite possibly wrap up the championship next weekend if he can pull far ahead enough of second placed Brad Lathrope also from Auckland who is on 590 points and third placed Steve Taylor from Hamilton with 584 points.

Queensland based Kiwi driver Baird currently sits in fourth ahead of Winton’s Nathan Pilcher in fifth.

A maximum of 225 points are available from a race weekend in the NZV8 Touring Cars.

In the faster TLX category it is Australia’s Jason Bargwanna who is leading the series ahead of Cambridge driver Nick Ross who suffered his first DNF of the season last month while at Teretonga Park.

With these two drivers the battle has not been over until the final race of the final round of the season and the pair have both held the title once each after two completed seasons in the NZV8 Touring Cars TLX category.

Lance Hughes from Hamilton sits in third place over Australian driver Scott Taylor who has teamed up with Bargwanna for this season in the Toyota stable and in fifth place is defending TL champion Ian Booth who sat out the South Island rounds.

The NZV8 Touring Cars will test next Friday 13 February but the real action gets underway with their qualifying session on Saturday morning at 11.51am followed by race one at 3.45pm.

On Sunday race two is at 11.04 with the excitement set to overload when the Jason Richards Memorial Trophy is contested in the afternoon at 2.22pm.

The trophy race is contested once a year by the entire field over a 20 lap race where the faster TLX cars must undertake a mandatory stop to change at least one wheel which in turn will open the door to the TL category cars to compete for the chequered flag.

In 2013 Auckland driver Andrew Anderson won the extended race three at Manfeild ahead of Kevin WIlliams both in TL cars with TLX driver Jason Bargwanna in third although that season it was not for the trophy which was contested at Taupo then.