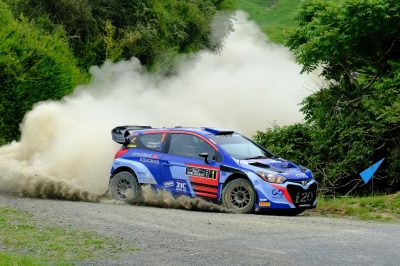 “It’s about staying competition fit; and while the events and car maybe different, you cannot substitute being in a competition environment,” says the 30-year-old of his 2018 schedule which includes the Otago, Whangarei, South Canterbury, Coromandel and Rally New Zealand NZRC rounds, as well September’s iconic Ashley Forest Rallysprint.

Paddon, who has made no secret of the fact he’d rather be contesting all 13 WRC rounds, has put together a 13-strong roster of international and national events.

“It’s great to be doing five of the six NZRC rounds with Canterbury being the only event we miss,” says the two-time New Zealand Rally Champion of what promises to be an extremely competitive national rally championship season.

“All five are amazing rallies starting with my favourite event, Rally Otago, in April. This year the NZRC even returns to the South Canterbury Rally in Timaru, which is where I learnt to drive so that’s going to be extra fun.

“Having an expanded New Zealand programme this year means not only that I keep my eye in but also get to drive some of the best rallying roads in the world. It’s a fun project with our New Zealand team and one that all of us enjoy. The relaxed atmosphere also allows us to maybe try the odd thing that we wouldn’t normally do.”

“I’m very pleased John can co-drive with me again in New Zealand – it’s just like the good old days and he is also really looking forward to getting back in the car. There is one event we know John is not available to do, so we are yet to decide who will sit in the car for that event.”

For the New Zealand events, Paddon is back behind the wheel of the Hyundai i20 AP4+ rally car launched in 2016 and run under the Hyundai New Zealand Rally Team banner by Paddon Rallysport. Paddon’s crew has been hard at work over the offseason, ensuring the Hyundai is in prime condition with a ground-up rebuild. Paddon says they have devoted some development time on the car’s transmission, suspension and steering systems to again improve driveability and reliability.

“This year’s programme is fantastic for Hyundai New Zealand, who are huge supporters of ours, as they can more closely involved with the New Zealand events this season. We’re all really looking forward to it.”

With the first NZRC event just on a month away, Paddon has joined in with car preparation alongside his ongoing physical and mental training. “The passion amongst our small team and their commitment is hard to not admire. It’s a really enjoyable environment to working with good friends as we strive for the same things this year.”

One of the team’s ambitions, subject to funding, is the construction of a second Hyundai i20 AP4+ rally car, ideally before the 2019 season.