Nelson’s Greg Winn has won the 2019 Youngs Automotive Ruff’n’Tuff 240, a one day endurance race in the production pine forests south-west of Nelson. It is two on the trot for the southern driver, who now leads the southern regional championship by one point from Taranaki class three driver Brendon Old, 108-107. 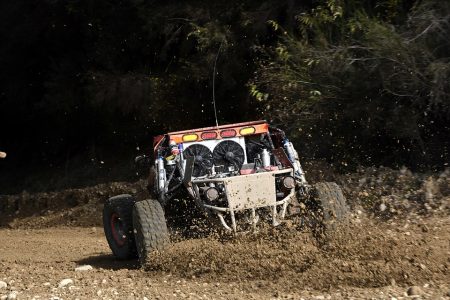 Driving his Scorpion Chev V8 race car, Winn survived a first-lap crash and rollover that was part of a multi-car incident which forced organisers to red flag the race and re-start for a revised distance of 220 km. The crashes happened two kilometres from the start at a skid clearing, where leading cars ran through the tape and either went off the road or in Winn’s case up a steep bank.

Most of those affected were able to regain the road and return to the pits in time to re-start.

Rejoining from down the order, Winn carved his way through the field, ran down the leaders and was named winner on corrected time in a faultless drive.

“It was a very good run, and I was very happy with the drivers out there, they all got out of the way without holding us up which made the big push safer,” he said.

Winn’s fellow Nelsonian, Nevil Basalaj, actually crossed the line first in his Jimco Chev V6, but was second once the time classification had been added to elapsed race time.

Fellow Nelson Driver Dan Fisher had led the race but went out when a CV joint on his car failed.
Flat tyres caused many racers problems. The faster sections of the course were linked by narrow ridge tracks leading into valleys and studded with pine tree stumps that could catch a froint of rear wheel and pop a tyre or even tear off a wheel.

First non-unlimited class racer to finish was Scott Munro who had started 19th and charged all the way to fourth in his standard-class UTV.

JG Civil UTV category sponsor Joel Giddy won the UTV S class for modified cars and set the fastest lap of the event, a 14:34.420 on his ninth lap of the 20 km circuit. He finished fifth overall.

A total of 39 cars had started the main race; 30 completed enough laps to be classified finishers.