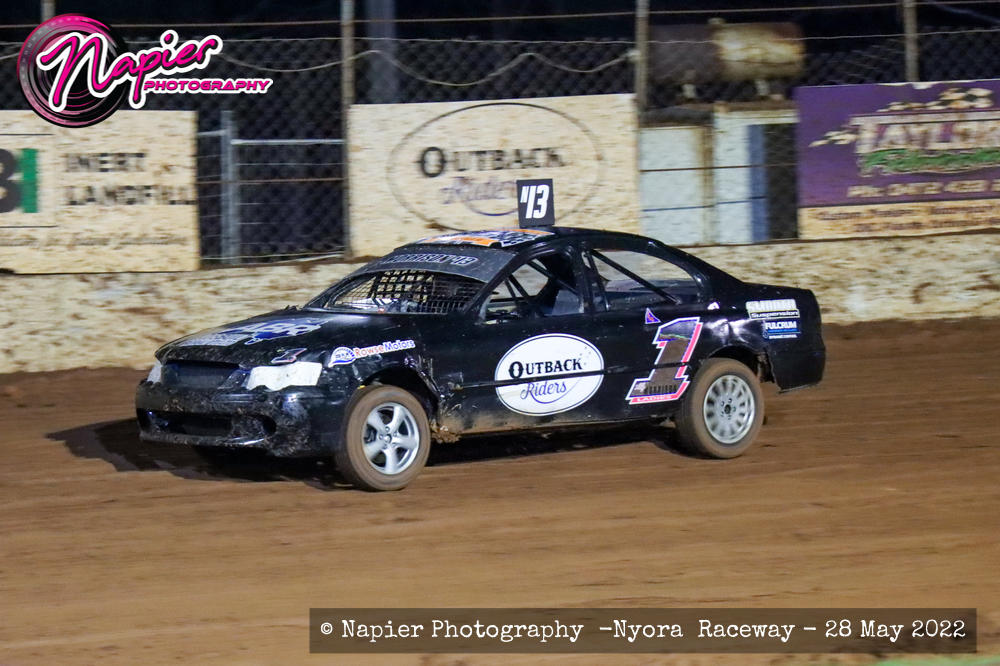 On Saturday night Nyora Raceway closed their season with a terrific family night of Fireworks, comedy from Captain Risky and Sheriff Jimmy Kane and of course, motorsport from the local heroes and the visiting Wingless Sprints. Wins went to Victorian Ladies Standard Saloon champion Ally Morrison from Pakenham in the Ladies class, Koo Wee Rup racer Rhys Lansdown in the Standard Saloon feature, and Wingless Sprint ‘King of Nyora’ Travis Millar who yet again wins the feature at the venue and continues to prove very difficult to beat. Also Harry Cecil in Junior Standard Saloons, Jayden Bryant and Cruz Farrell in Speedway Sedan Australia Juniors and another Koo Wee Rup based racer Jayde Aarts in the Open Sedans.

Ally Morrison won every race in the Ladies Standard Saloon ‘Skirts in the Dirt’ feature that included the three heat races and then the final. She was a class above all night and went on to defeat Warragul’s Tracey Ingram who herself is an accomplished racer trying to chase the younger Morrison who has lifted the bar another notch. Dette Miles finished in third in front of Caroline Allen and fifth was Catani’s Maddison Miles.

Impressively in the Standard Saloon class, Rhys Lansdown started back in thirteenth in a borrowed race car after his suffered mechanical issues in qualifying. Lansdown then set about passing the likes of Ash Dean, Kacey Ingram, Matt Leek, Chris Miles, Andrew Miles, Damon Ingram, and Brodie Ardley before finally passing Wayne Sheerman for the win in the closing stages of the final. Lansdown won racing in a Cecil family car from Sheerman, Ardley, Leek, and Damon Ingram.

The visiting Wingless Sprints continued to put on terrific racing with the lead racer Travis Miller setting lap times in the very low 15-second bracket and consistently quicker than anybody else did. He was able to win the feature event ahead of Adin Robertson, Peter Logue, Scott Irons from Drouin, and Tyler O’Leary.

Sports Sedans and Division2 Hot Rods combined to race as Open Sedans. Jayde Aarts went on to the win in front of father and son due Jamie Thomsen and Ian Thomsen with Daniel Angus and Matt Shankland rounding out the top five.

Harry Cecil the current Victoria 2 in the Junior Standard Saloons won the final state series round for the class. He was able to secure victory in front of his brother Owen Cecil and Nathan Miles, Chase Ingram, and Zac Barwise.