Nyora entertain the crowd on cold night in Gippsland

Nyora entertain the crowd on cold night in Gippsland 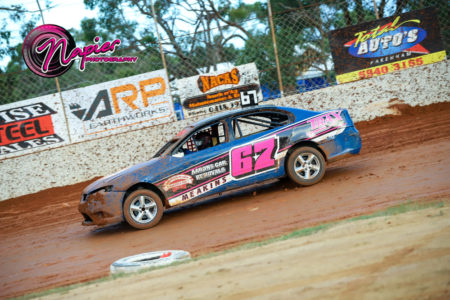 Nyora Raceway South Gippsland’s home of Motorsport defied the elements on Saturday night when they worked through terribly cold wind and the fleeting rain to complete a complete race meeting for its motorsport hungry fans. Six winners were determined through the night amongst them Damon Ingram from Warragul and Mark Miles from Pakenham, plus a first ever feature race win to Sharlotte McPherson and a first adult age career feature win for Courtney Meakins.

Speedway Sedan Australia Top Star Junior Sedan action over four qualifying heat races resulted in wins to Jayden Bryant twice, then Paterson and Bree Simpson. The feature race event was a nose to tail affair with Bryant leading almost all the way before Paterson made a pass as the race was nearing its end to take the lead. Paterson crossed the finish line with Bryant, Dylan Barrow, Jaxson Vella and Simpson rounding out the top five.

Also competing was the Speedway Sedan Australia New Stars with Toby Parks, McPherson, Jack Randall and Tamieka Simpson all race winners in the qualifiers. Parks had a crash in qualifying to end his race night whilst Randall’s car sustained mechanical damage and ended his evening. In the final after a great start by Simpson, McPherson rounded her up and went on to take the race win with Jack Kershaw following the two girls home in third ahead of Fletcher Barron and Maddy Capon who came storming back to the front end after a rear of field penalty she incurred during the race.

Victorian Speedway Council Junior Standard Saloons also competed in four qualifiers with Owen Cecil, Damon Ingram twice and Harry Cecil taking wins. Ingram who had won the previous weekend at Bairnsdale then proved to be too quick for everybody else as he stormed to a second win in seven days with Owen Cecil, Harry Cecil, Maddison Miles and Zac Barwise rounding out the top five results.

With a Ladies Standard Saloon Victorian title at Nyora later this season the women were eager to gain a psychological advantage as the title event gets closer. Tracey Ingram with a win and then Courtney Meakins with two wins shared results in the three qualifying races before Meakins fresh out of Junior racing last season put on a terrific show as she defeated Ingram, current Victorian Champion Trish Dike, Sarah Price and Rebecca Glassborow in the feature event.

Mark Miles is now the veteran of the local Standard Saloon racers at Nyora and you could be forgiven for thinking he was in a Junior race as the night went on because he was battling against 18 and 17 year olds at the front of the field in the Open Standard Saloons. Wins in qualifying went to Mark Miles, Bobby Devine, Brodie Ardley, Rhys Lansdown, Mark Miles a second time and Brendon Miles. Mark Miles then lead all the way through the feature to defeat Koo Wee Rup’s Rhys Lansdown last years Victorian Junior Standard Saloon Champion and Kacey Ingram from Warragul who was last season’s runner up in the that same title. Mick Coomer finished fourth with Darwyn Lee in fifth.

Rounding out all the results for the evening was the Sports Sedans. This category will also hold their Victorian title at Nyora this season and across six qualifying races wins went the way of Steve Akil, Damian Miller, Paull, Shane Ardley, Paull a second time and Robert Garlick. The current Victorian Champion Paull was quick out of the blocks off the front row and despite early race pressure from Warrick Taylor; Paull stretched a gap on the field. Miller who was expected to seriously challenge had tyre failure and Beach and Ardley both reeled in Taylor towards the end before his car crawled to the finish line with a yet to be confirmed cause, likely wiring type concern. Lee Beach finished second, Shane Ardley third, then Taylor and Anthony Sgroi.

Nyora Raceway will next entertain on February 13th when the All Star Sprintcar Series visits town along with the Miles Cup for Standard Saloons as a supporting feature event.