NSW Sports Sedan title on the line this weekend

NSW Sports Sedan title on the line this weekend 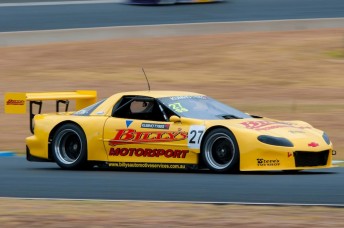 The CAMS NSW State Motor Racing Championships return to Wakefield Park this weekend for their fifth round of 2014, and Birol Cetin could clinch the Sports Sedan crown in his spectacular V8 Chevrolet Camaro with a round to spare.Cetin finished second overall behind Steven Lacey, also in a Camaro, in the opening round of the Sports Sedans at Wakefield Park in March. Since then, three rounds have been held at Sydney Motorsport Park and Cetin has been victorious in all three, opening up an 88-point lead over Lacey.If Cetin can stretch his lead to 95 points this weekend, he will seal the title with one round remaining.“The car has been fast all year, and even though we finished behind Steven last time we raced at Wakefield, we were battling with clutch and brake problems that weekend,” Cetin said.“I think we’ll have a strong package and the aim will definitely be to try and wrap up the championship on Sunday.”The exciting Formula Vee category returns to Wakefield Park this weekend, with Dylan Thomas heading the points from defending champion Tim Brook.Thomas and Brook’s main rivals will be Simon Pace, veteran Michael Kinsella and impressive newcomer James Horne, and the Vees have typically produced enthralling racing with three-wide slipstreaming battles on the main straight and last-corner changes for the lead keeping spectators on the edge of their seats.HQ Holdens make their second appearance of the year at Wakefield, with a strong 25-car field. John Baxter is defending a slender points lead from Chris Molle with Joshua Jackson currently holding third in the standings, while defending series champion Brett Osborn is a lowly sixth after suffering some mechanical problems in the first three rounds of the season.The Formula Ford field has been boosted by the addition of national series frontrunners Tom Randle and Liam McAdam, who are taking the opportunity to gain valuable laps at the Wakefield Park circuit ahead of the Shannons Nationals meeting in October.Open-wheel fans will also enjoy the Formula Race Car series, which features an array of “wings and slicks” vehicles including Formula 3 cars. Likely front-runners are David Choon, Glenn Lynch and Graeme Holmes.A few CAMS categories are making their first appearance of the year at Wakefield Park, after holding their opening rounds of the season at Sydney Motorsport Park.One of these categories is Supersports, which features the popular Radical SR3 and SR8 cars, along with the Stohrs of Adam Proctor and Darren Barlow. One notable entry is the electric SR8 which will be driven by Garth Walden, and go head-to-head with the petrol-powered vehicles.Also making their first trip to Goulburn are the Improved Production Over and Under 2 Litre categories.In Over 2 Litre, Steven Devjak (Holden VX Commodore V8) will be looking to capitalise on points leader Graeme Watts’ absence to occupy the top of the standings, while David Crighton (Nissan Silvia) currently leads the Under 2 Litre pointscore but will face strong competition from Justin McClintock (Toyota Sprinter) and reigning National Champion Bob Jowett (Honda Civic).Production Sports Cars round out the busy nine-category schedule for this weekend; entry for spectators is $20 each day, with children under 16 free.