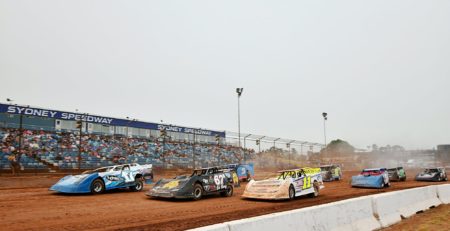 With a brand-new race track in Eastern Creek Speedway, over $100,000 in prize money up for grabs and record competitor numbers, to say that the NSW Late Models are set for an exciting 2021-22 season would be quite the understatement.

The upcoming season is going to see the NSW Late Models appear on 12 occasions at the brand-new Eastern Creek Speedway, which is headed by the running of the NSW Title on February 19, and the newly-launched Wild West Shootout Series that is to be fought out over five rounds across regional tracks around NSW.

The blue-ribbon event on the NSW Late Models calendar is the NSW Title that is going to be held at Eastern Creek Speedway on February 19 and the major sponsor for this exciting event is going to be Human Force. The NSW Title is going to pay $5,000 to the winner as part of the $15,000 payout.

Apart from the end-of-season point fund, the Wild West Shootout Series, proudly sponsored by United Realty, is going to pay out $1,500 to the winner, $1,000 for second and $500 for third.

Over the course of the season, Burson Auto Parts, 3-99 Motorsport, and Eagle Earthworx are going to be offering a range of contingency prizes via their valued sponsorship of the NSW Late Models ranks.

In what was a limited schedule last season, which saw Lachlan Onley come out on top in the overall NSW Late Model point score ahead of Daniel Cassidy and Aaron Barnes in second and third place respectively, the upcoming 2021-22 season boasts over 20 registered Late Models.

Excitingly there are a number of yet to be announced drivers to join the NSW Late Models for the upcoming season. Hopefully these mystery drivers will be confirmed in the coming months.

NSW Late Models president Ross Nicastri is really excited about the upcoming season that he is hopeful is their biggest yet.

“There is a lot of hype about the season ahead from our committee, sponsors, competitors and race fans, and we all can’t wait for the season to get underway and there is no doubt that it’s going to be our biggest season yet.”

The NSW Late Models would like to thank their 2021-22 season supporters: