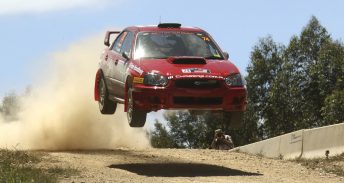 The NSW Rally Championship will always be the premier series in the State and 2018 will see seven events, to be shared with the recently announced East Coast Classic Rally Series.

The NSW Rally Championship and East Coast Classic Rally Series will consist of the following events in 2018:

Please note there are a couple of date changes since the previous ECCRS announcement.  The East Coast Classic Rally Series – catering for vehicles complying with the CAMS Classic Rally Car classes C1, C2, C3 and C4 and Club Rally Cars that are over 30 years old – is generating a great deal of interest and should produce some exciting action in 2018.

Each event in the NSWRC/ECCRS will be split into two heats, solely for the purpose of allocating Series points.  Series points will be split evenly between the two heats.  The heats won’t impact on results for the individual events.  If a crew DNFs one heat and finishes the other, they will still be classed as a non-finisher for the event, but will at least receive some Series points.

It is envisaged that some of the NSWRC/ECCRS events will be pace noted and the rest will use route instructions.  It will be up to individual event organisers to decide whether their events will be noted or blind; however the event organisers of the Border Ranges, Rally of the Bay and Rally Australia have advised that they will be pace noted events.

The Clubman Rally Series – a term that’s familiar to many a seasoned competitor – will consist of relaxed, highly social events designed for competitors who prefer basic rallies without the use of pace notes.  They will be single day events, structured to minimise time and cost impacts to competitors.  In a lot of cases, Clubman events will be able to be contested without the need for overnight accommodation.

The Clubman Rally Series will cater to all levels of rallying, with the following categories at each event:

NSW Rally Panel Chair John Sparkes said, “Everything we’re doing on the Panel is designed to encourage increased participation in the sport.

“The new Clubman Rally Series will cater to all these needs and we’re hoping for a big year with the series,” he added.

The 2018 Clubman Rally Series will consist of six events as follows:

Dates and events for the NSW Rallysprint Series will be announced shortly.