Not One, Not two, but three times – Your Australian champion AJ McTaggart

Not One, Not two, but three times – Your Australian champion AJ McTaggart 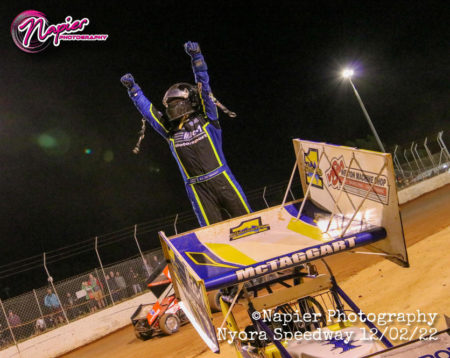 Lightning Sprint competitors from Queensland down to Victoria competed in a sensational 40th running of the ‘R & K Alignments and Exhausts’ Australian title with the reigning Australian champion AJ McTaggart completing a three peat across four years with a Covid affected season in between. McTaggart in a race night that was an outstanding advertisement for the Lightning Sprints governing bodies showcasing their place as a national class, was the winner ahead of Keith Blatch from Queensland, 16-year-old Harley Graham, Jordan Binskin and Victorian Michael Conway.

Nyora Raceway was jam packed with fans as the Australian title shared top billing with the All Star Sprintcar series whilst the title was given the best track for the title race before the big toys. The crowd whilst not official confirmed could have been anywhere between 1700 to 2500 people. Just massive and a wonderful night to hold a title.

The host Victorian Mini Lightning Sprints Association had various awards on offer through the night and a great bunch of volunteers dedicating their time and effort into specific roles on race night to keep the show rolling along.

Eleven of the seventeen competitors recorded lap times under the fifteen second mark on a track affected at times by heat and by the Sprintcars tyres, however there was every chance throughout the night to pass on more than one race line if you were quick enough to do so.

Former national champion Scott Withers (N14 – Purcell Performance – Zx12/Henchcraft) reminded everybody why he was indeed a former champion when he won the first heat race of the night. Withers converted his pole position start to a victory in front of Scott Moir, Michael Conway, Pete Styles, Danny Stone, Jordan Binskin, Jack Selmes (N19 – Engadine Trailers – ZX12/FOZ) and Andrew Burleigh whilst Andy Kimm was disqualified after finishing second on track when he failed to head to scales. Styles had moved froward from ninth and Kimm from eighth spot during the race.

In the only heat race to go start to finish without a stoppage, Harley Graham (N27 – East Coast Clear Pools – ZX12/Henchcraft) converted his front row start in round one to a win in front of another former national champion, Queenslander Sean Iacono. McTaggart finished in third with Matt Reed, Keith Blatch, Ally Moore and Maureen Sell (V72 – Cyclo Products – ZX10/Henchcraft) all finishing and Kyle Thomas out of the race on the infield. It was a five second victory margin in a race time of 2:52.067 at the finish.

In round two Peter Styles (N45 – Jettco Developments – R1M/Hyper) in his own words won the equivalent of a lottery in Speedway when Andrew Kimm with the bit between his teeth after a round one disqualification lead all the way in the first heat of the round before greeting the white flag only to mistake it for the chequered flag slowing down whilst the green light was still on and allowing Styles to pass and win the race. Kimm did enough to still finish second just ahead of team mate Keith Blatch .016 behind him. Binskin finished fourth, McTaggart, Burleigh, Moore (#26 – Skillys Tyre & Auto – R1 1000/Henchcraft) and Sell the others to finish with Withers unable to do so.

Current Victorian champion Danny Stone (N47 – BPS Autobody – ZX10 Henchcraft) was yet another driver to convert a front row start to a victory when he won the fourth qualifier in front of Victoria’s strongest chance for the evening Michael Conway (V77 – Dulux – ZX10/Henchcraft). Conway was .668 behind Stone in the finish with Matt Reed in third in front of Graham.

The infield resembled the parking lot of an Auto Mechanics yard with Selmes, Thomas, Iacono and Moir all in the middle. Moir (N11 – Allform Fire and Electrical – GSXR 1000/Henchcraft) having rolled and not being allowed to restart despite believing rules would allow him to do so, and Iacono (Q7 – Toowoomba Mobile Welding – ZX12/Henchcraft) with a blown clutch and no parts handy to put it back together ending his night right there.

Blatch (Q77 – Blatch’s Mechanical Repairs – ZX10/Razor) then won the first heat in the final round when he held out fellow Queenslander Andy Kimm, Graham, Conway, Moir, Withers and Reed whilst Stone and Burleigh both did not finish and in the final heat of the evening McTaggart sped the Australia 1 car to the win in front of Binskin, Thomas (N77 – Mac 1 Motorsports – ZX10/XXX), Moore and Sell whilst Styles was a non-finisher.

McTaggart was left frustrated in trying to get to the pits and prepare for the national title feature event when the exit gate running on a battery powered opening system failed to open to allow him into the pits after his winner’s interview. Eventually he was able to get off the track and the stewards pushed the title race back a little to give him some time to prepare.

The flagman a soon to be Lightning Sprint race driver himself Chris Skilton, dropped the flag on the R & K Alignment and Exhausts Lightning Sprint national title and McTaggart took the lead from the green with Graham, Blatch, Binskin and Conway the first five to the line on lap one. Blatch and Binskin had got a jump on Conway early whilst Withers was out of the race on lap one.

On the second last lap of the race, Blatch picked off Graham for second spot as McTaggart sped away out front as he had done for the whole race. At the chequered flag McTaggart had won by over three seconds from Blatch, Graham, Binskin, Conway, Reed, Styles, Moir, Burleigh (V17 – Ultimate Awards – R1 1000/Stealth), Kimm and Sell rounded out the field.

McTaggart set the fastest one lap of the night in the final in the second last race on the track for the evening after almost thirty sessions and races on the track and a repreparation.

After the race McTaggart spoke with Australian Lightning Sprints media representative for the evening Dean Thompson. “These things do not come easy at all. To win the third title in succession is something I was striving to do, however was never over confident about. This class is a great class and I hope we have all put on a show that fans have enjoyed and given people a reason to join us. I congratulate the Victorian club for their hosting of the event, and everybody involved, well done to the rest of the competitors for their results and thank you to my sponsors and my family and supporters, especially my dad.” Shared McTaggart.

The Superior Concrete supported first placed B Grade competitors was none other than Harley Graham who not only won this award and its spoils, but he clinched the Australia number 3 moniker.

The Vinyl Leo supported First diff drive car to finish was Andrew Burleigh. This award is a tradition as the class has traditionally been a Car and Bike powered combined field. Diff drive race cars are becoming less prevalent as many racers moved to chain driven.

Burleigh also won the Hard Charger award for moving forward the most spots in the title race, an award his business Ultimate Awards sponsored.

Starwest Drilling heat race winners were as mentioned above Withers, Graham, Styles, Stone, Blatch, and McTaggart. Six different winners over the evening, another example of how close this class is competitively.

The title co-ordinator Ally Moore was very pleased with the weekend’s outcome at the end of race night. “From the time when people like David Alie said let’s do this right to the time where we as a club all committed and sorted out who was responsible for what, we have been 100% focussed on this showcase and judging by all the feedback, we have had a major success tonight. Thank you to my fellow club members for their support and their efforts I do not want to miss anybody, so I am sure they know who they are and thank you to Pete of the Australian governing body for his support right along the way also. Thank you to Rahmon and Karen for being there for us as the major sponsor despite the setbacks you have had in not being able to compete and thank you to Nyora Raceway for allowing us to showcase our class in such a great crowd. If anybody would like to join us, send us a message on our social media channels.” Shared Ally.