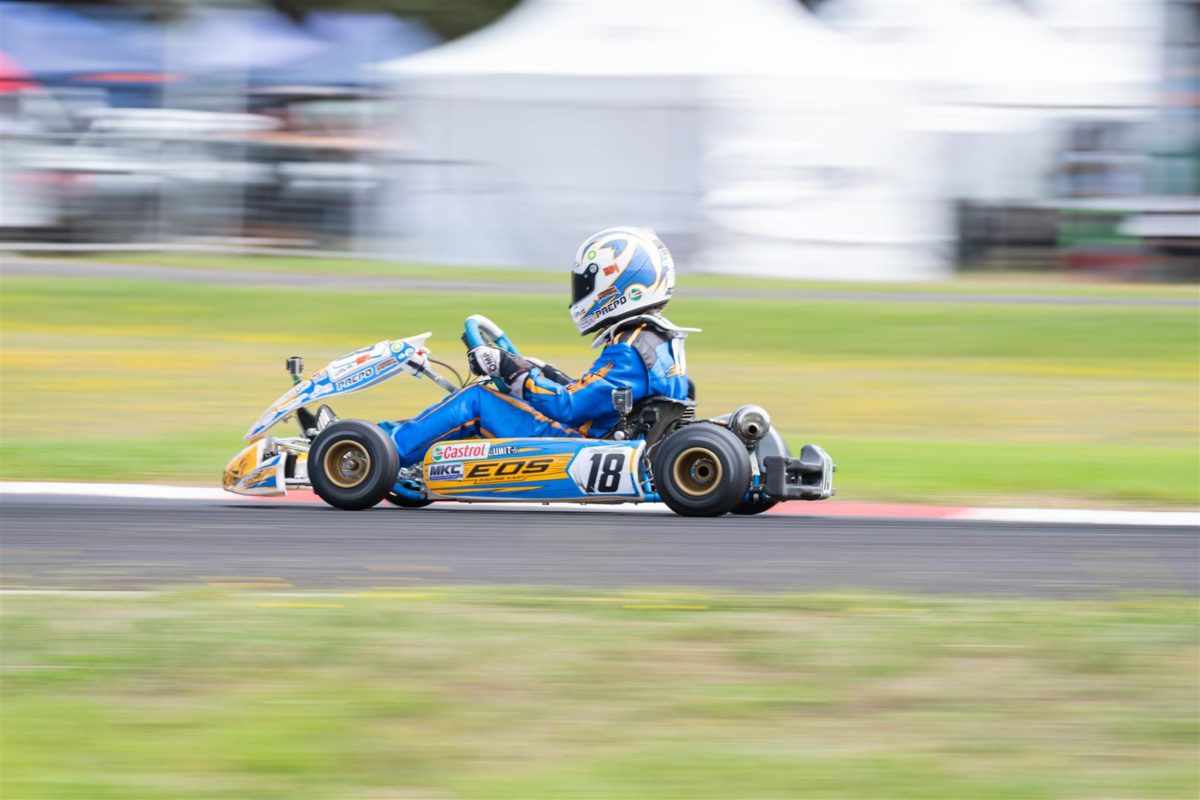 Mathew Basso headed north to the top end of Australia to take place in the 2022 Northern Territory State Championships which were being held at the Hidden Valley Kart Club.

Basso with the help of DPE Kart Superstore, Territory Karts, and Melbourne Kart Centre was able to get his kart couriered to the top end, ready for another state title race.

Mathew used Thursday and Friday to get up to speed and realized he was in for a tough weekend of racing against some high-caliber drivers and some fast locals.

Basso was able to be third fastest coming off the two days of practice and qualifying at 6pm Friday night was the start of the young drivers racing weekend.

Mathew was able to quickly work himself into the top five and be right in the front battle for pole position.

Basso continued to push as hard as he could to get up the grid and on the inside of the starts for the opening heat.

Mathew finished the session in a credible position four, only four hundred’s off the third spot.

Basso wasn’t happy with his starting spot and was looking to improve going into the heats.

Mathew was starting on the second row on the outside of the track and was looking to get a clean getaway into turn one.

Basso got shuffled back off the start and through turn one, dropping back to position six.

The Hidden Valley circuit has a tight and hard-to-pass layout, so Mathew was up against it trying to make his way forward through the field.

Basso was able to make his way back inside the top five and was right behind the battle in front of him. Mathew was classified in position five in the opening heat, only a few tenths behind fourth spot.

Basso was once again on the outside of the second row in heat two and was looking to stay in his position.

Much like heat one, Mathew got shuffled back to sixth spot and had work to do to make his way back up through the field.

Basso made his way back into the top five and had his head down to try and chase the four drivers ahead of him while improving lap time.

Mathew came home with another consistent fifth spot which meant he was off the all-important inside of the third row for the third heat.

Mathew was now on the inside for the third heat, got a clean get away and was right in the top five battle! Basso was putting in smooth and consistent laps, trying to chase down the local drivers and make his way up the field.

Mathew made his way inside the top three as the race went on and was looking strong.

Basso raced hard in the pack but made a small mistake coming onto the main straight and was shuffled back to position five once again in some hard racing with some quick local drivers.

Mathew was able to cross the line for another consistent fifth place.

Basso was looking to the fourth and final heat to make his way forward.

Basso was ready to go for his fourth and final heat and was looking to make his way further into the top five.

Basso was showing his best pace of the weekend and hunting down the race leaders.

Mathew continued his push forward and moved into second in the later stages of the race.

Basso was able to come home for his best finish of the weekend in second spot in a superb result.

Sunday was finals day and Mathew was looking to continue his progression forward and come home strong in the Northern Territory State Championships.

In the all-important final, Basso started in position 3 and got another great start, moving into second spot right behind race leader Ky Burke.

In the battle at the start of the race, Mathew dropped down to third spot behind one of the local drivers and now had his eyes forward.

Basso put in a superb final applying pressure on second place and on lap 16 or 20 was able to make his way back up into second spot and come home with a strong podium finish.

“Wow, what a race, Mathew drove really well all weekend and was rewarded for his hard work with a second-place finish in the final,” Paul said.

“There was a particular spot of the track that he struggled with all weekend but we were lucky enough to have it all sorted out in heat four and then of course the final.”

Mathew was happy with the results at the meeting.

“This weekend has been fantastic, the locals have been so welcoming, and I made several new friends which is fantastic,” Mathew said.

“Ky did a great job all weekend, but I do want to do better next time.

“This has been my best result at a state level, so I am stoked.”