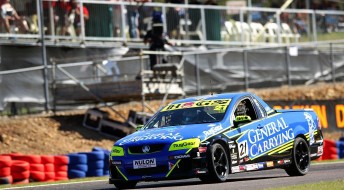 Gold Coast’s Matt Nolan is looking ahead to the fourth round of the 2014 Australian V8 Ute Racing Series following a successful return to Murphy Motorsport and Holden at Hidden Valley Raceway in Darwin with the former Jetski champion hopeful of a strong result on the streets of Townsville this weekend.

After securing a time of 1:25.213 through the combined practice sessions on Friday, Matt was confident of progressing up the order in Saturday morning’s qualifying. Working intently alongside the Murphy Motorsport crew and teammates Craig Dontas and Nathan Pretty, Nolan was chasing an improvement to set up his first twelve lap race of the weekend.

“We made some improvements from practice one to practice two and I felt we were definitely heading in the right direction. Our first sector times were impressive so the team and I identified that improvement was needed in sector two and three to piece together a fast lap.”

“Overall I was disappointed with my qualifying efforts, my quickest time of a 1:24.399 wasn’t where I wanted to be however I knew I had it in me to improve in the races, the team were behind me so I worked hard to deliver a result for them and the whole General Carrying Racing crew,” Nolan said.

Despite a disappointing jump away from the line, contact early in race one prevented a strong result for Matt in the opening twelve lap event, opting to pit to ensure no further damage would arise. After dropping a lap, Nolan returned to the track to eventually finish 23rd, subsequently filling him with the determination to improve in race two and three on Sunday.

“I made a poor start in race one but the contact early on really hurt our chances, I had to pit to make sure I wasn’t going to cause any more damage to the car but decided to return to the track to get some more laps under my belt. I know we can improve in Sunday’s races, it’s now up to me to deliver,” Nolan added.

A strong improvement by Matt in race two saw a good start before battling into the top 20 overall as he became re-acquainted with his General Carrying Racing Holden V8 Ute over the course of the second twelve lap race.

Finishing 20th and delivering an overall improvement in lap times compared with that of his opposition, Nolan admitted he felt more comfortable in the car with one race remaining.

“I got a really good start in race two and that allowed me to engage in battles with cars further up the field, it showed a good reflection of the improvement in outright race pace that myself and the team had worked on over the weekend and it set us up well for the final race,” Nolan said.

however a reduction in tyre life saw his chances fade of a replicated result. After finishing 23rd, Nolan now knows areas

has to improve on ahead of hitting the streets in Townsville in eight days time.

“We had another really strong start in race three and fought it out with the guys around me, though having old tyres on dampened our chances later in the race as they wore out in the warm conditions.”

“It was a reasonably good weekend however we know the areas we need to improve on leading into Townsville this weekend. This time last year is when I really felt a strong development in my driving so I’m hoping that it will be replicated this season and we can start to put some good results on the board for my sponsors, team and my own confidence behind the wheel,” Nolan concluded.

Round four of the 2014 Australian V8 Ute Racing Series will take place at the Castrol Townsville 500 driven by Tafe Queensland from July 4-6.