Nolan chasing success in the West

Nolan chasing success in the West 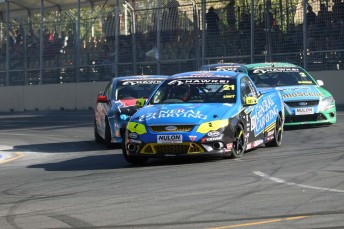 Matt Nolan is looking to move his way through the Australian V8 Ute Racing Series field as the second round hits Barbagallo following a two month hiatus since the opening round at the Clipsal 500. Nolan is hoping to become further acquainted with the Big Gun Racing prepared FG Falcon as the season kicks back into gear.

The switch to Ford after having made his V8 Ute series debut in a Holden proved to be an issue for Matt at the Clipsal 500 as he worked continuously to adapt to the changed driving style. With the Adelaide circuit having numerous heavy braking points, Nolan admits it was a challenge for him to become comfortable with his new car and that it would be a gradual process leading into the Perth event.

“By the end of the Clipsal 500 I was really happy with where my braking was at but I am still working on becoming fully conversant with the car and that is a process that I know isn’t far away from completion, it’s a matter of working closely with the team and learning where I can improve,” Nolan said.

Despite the challenges of the opening round on the streets of Adelaide, Matt still experienced some strong results and improving times. The Queensland based driver admits he could have performed better in patches, however he is hopeful that the Perth event will be a better one for him.

“I’m really looking to bounce back at Barbagallo from a disappointing debut in the General Carrying Racing Ford FG Falcon, I really expected a lot better of myself. The team definitely gave me a good fast car so hopefully we can turn things around in Perth and start earning some Championship points and move up the order,” Nolan added.

Despite having a home base on the Gold Coast, Matt spends a lot of time in the northern regions of Western Australia as part of his work contracts and he admits it will be an extra boost for himself to deliver a good result in front of friends and supporters.

“I’m really looking forward to getting to Perth, it’s like a second home to me. I tend to spend more time in WA than I actually do in Queensland so it will be good to race in front of an unofficial home crowd. I know myself that I will need to be on my game with the local support trackside,” Nolan concluded.

Round two of the 2014 Australian V8 Ute Racing Series protected by Hawkei will take place at the Perth 400, Barbagallo, Perth, WA from May 16-18.