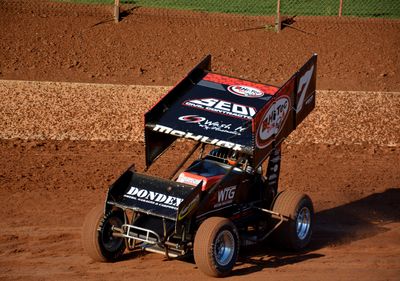 Continuing his domination of the Queensland Sprintcar season, Lachlan McHugh triumphed again at Archerfield Speedway on Wednesday night (January 13), scoring yet another feature race victory in round four of the Speedway Australia Super Seven Series presented by Titan Garages. McHugh led early, was demoted momentarily before regaining the ascendancy to claim his third consecutive Super Seven Series feature race and his eighth win from ten feature race starts at Archerfield so far this season. For so much of the night, Luke Oldfield was on track to make his return to victory lane, only to again find a win agonisingly out of reach, leaving him to settle for second place once more, his seventh podium result of the season. A last gasp all-or-nothing lunge from Nicholas Whell in the final metres of the 35-lap race propelled him to his best ever feature race finish in third place, pushing Ryan McNamara back to fourth, with a season-best result from Dave Fanning in fifth.

Having finished on the podium at every round of the TFH Midget Series, Darren Vine did it again in round six, but on this occasion he found himself in the best position of all when the chequer fell to confirm his first feature race success of the season. Chris Singleton took over the lead when Michael Kendall exited early and he kept Vine at bay for another 10 circulations before finding himself unable to counter an inside run from Vine exiting turn four with just four laps remaining.

A 29-car field gathered on the infield for Sprintcar qualifying, although neither Randy Morgan nor Libby Ellis would take their laps against the clock, with Morgan never to be seen again. As the fifth car to hit the track, Oldfield clocked a best lap of 11.422 that ultimately proved to be a benchmark target that nobody else could match. Fanning came closest with a 11.609 best effort, followed by McNamara (11.633), Tim Farrell (11.748), McHugh (11.793) and Darren Jensen (11.794). Rounding out the top ten on a night that saw more than half the field drop under 12 seconds, were Cody Maroske, Callim Walker, Whell and Marcus Dumesny.

The opening heat went to Adam Butler over Titman and Brock Dean, with Oldfield zooming from the back of the inversion to finish fourth.

Fanning and Walker made contact through turn one on the opening lap of heat two but both continued, only for the race to be halted a lap later when Taylor Prosser and Andrew Baumber tangled in turn two. Although it was Baumber who tipped over in the incident, he was able to continue while Prosser headed infield. Kevin Britten would go on to win the race ahead of Dylan Menz and Allan Woods.

Brent Kratzmann was untroubled from the outside front row in heat three, cruising home to win in advance of Paul Rooks and Aaron Kelly.

Heat four saw Baumber bounce back from his earlier mishap in the best possible way, leading from the front to clinch first ever heat win by downing Britten and Rooks.

Brad Ayers was gifted pole position in heat five when Prosser was deemed to have jumped the start and relegated to row two. However, Ayers was unable to take advantage of his good fortune and would ultimately finish fourth behind Jayden Peacock, Titman and Butler.

Aaron Kelly suffered a setback in the final heat when he arrived in turn four to find McHugh out of shape, the contact correcting McHugh’s trajectory through the corner, but putting Kelly out of action and subsequently confined to the depths of the B Main grid. In what would be the closest finish of the night, Dean would fend off the best efforts of Kratzmann to secure the win, with Woods home third.

In the bronze round of the Pole Shootout, Titman and Woods were fastest of the first foursome and advanced to the next round as Whell and Farrell bowed out. Titman would prevail again in the silver round, taking McNamara with him into the final round and confining Fanning and Woods to the third row of the feature race grid. The final round saw Titman fall short in his bold quest for pole position as McHugh topped the timesheets, while a spin from Oldfield prevented him from doing any better than third overall and a spot on the second row alongside McNamara.

Starting seventh, Kelly wasted no time in moving forward in the B Main to be sitting fourth after one lap of racing. From here, things became a little more difficult but he would ultimately chase down the leading trio to emerge with the lead on lap 11. Menz and Ayers filled the minor placings with Dean keeping Rooks at bay to secure the final transfer spot into the main event.

Like the rest of the night that preceded it, the 35-lap Titan Garages Super Sevens Feature Race was devoid of any major incidents, with McHugh and Oldfield leading the field away. On lap five, Titman slipped ahead of Oldfield for second spot while, further back, Dumesny spun away his chances in turn four, managing to keep the Valvoline #47 moving to avoid a restart but now finding himself at the back of the field. Titman surged into the lead on lap 10, but his reign only lasted a lap before he found himself caught up in an incident with Kevin Britten in turn four that left both cars immobile. Whilst Britten was able to rejoin, Titman would become the only casualty of the race, handing the lead back to McHugh who, for the second time in as many rounds, would take maximum advantage of a rival’s demise. From the restart, McHugh led Oldfield, Fanning, McNamara and the rest, with Kelly’s charge through the field hampered momentarily when he dropped two spots through turn two. As the laps wound down, McHugh encountered heavy traffic but even that wasn’t enough to bring Oldfield within striking distance as the top two spots remained unchanged. Both Whell and McNamara had moved ahead of Fanning by lap 15 and became embroiled in a very spirited battle for the final place on the podium. McNamara held third spot for ten laps before Whell took over on lap 25, only for the positions to change again on lap 31. Just when it looked as though McNamara had the position in his keeping, Whell ushered forth a final surge to snatch the spot as they swept under the chequer. Fanning and Farrell were next in line ahead of Kratzmann, Maroske, Kelly and Walker.

Making his return to the Midget ranks, Kiwi expat Michael Kendall was on the pace from the outset, downing Vine and Brad Dawson in the opening heat.

Heat two saw Singleton prevail over Kendall and Vine, with Cal Whatmore taking out the third preliminary from Dawson and Singleton.

As expected, Kendall skipped clear of the field at the drop of the green to get the TFH feature underway and had already established a sizeable lead when he slowed and headed infield on lap five, handing the lead to Singleton ahead of Vine and Dawson. With neither willing to initiate a move away from the pole line, Singleton and Vine ran line astern for lap after lap until the an opportunity arose exiting turn four on lap 17 that enabled Vine to slip underneath and into the lead, but not before a little contact between the pair. From here, Vine was never going to let this one slip away as he charged to the line to finally notch another entry in his long list of feature race wins. Singleton remained second ahead of Dawson, Whatmore and Mitchell Rooke, with Brodie Tulloch, Sean Dyson and Rob Stewart the only other finishers from a small field.

Round four of the Shock Absorber Therapy AMCA Nationals Track Championship played out exactly as the form guide suggested it should with Bruce Marshall and Steve Potts fighting it out for feature race honours. As the only drivers to have won a feature race at Archerfield this season, the duo again proved the pick of the crop with Marshall keeping Potts at bay on this occasion to take the race. In fact, there were no changes at the front of the field throughout the event as Steve Price picked up third ahead of Matt Hardy and Lee McKinnell. A late-race pass from Russ Hardy saw him snare sixth, with Brett Robotham, Damien Groer, Thomas Vickery and Troy Price rounding out the top ten.

Potts and Marshall scored a heat win apiece and, with each snaring a runner-up result in their other heat race, they finished as equal top qualifiers. McKinnell and Matt Hardy, aboard a new car, also collected heat wins.

Following heat wins to Paul Robinson, Mick Reid and Casey O’Connell, it was the current state champ in O’Connell who would also emerge victorious in the Wingless Sprint feature race, albeit by much closer margin than perhaps expected. Robinson hounded O’Connell from go to whoa and would finish less than half a second adrift in second spot, leaving Michael Butcher to get the better of Liam Atkinson and Lachlan Robertson in the scrap for the minor placings.

Jason Rae and Jim Kennedy split Lightning Sprint heat wins between them, but come feature race time it was all Tyler Stralow. Launching from pole position courtesy of top-three results in both heats, Stralow was never threatened and finished more than three seconds clear of Andrew Kimm, with Kennedy and Rae the best of the rest.

Kacy Lee Black and Henry Titman were the standouts of the Formula 500 Juniors, with each winning a heat before filling the top two spots in the feature, the second win from as many starts at Archerfield for Black. Third-placed Noah Ball was more than five seconds off the pace of the lead pair, with Tim Devine and Jared Boys completing the first five.

The next meeting at Archerfield Speedway is on Saturday, December 23 featuring the Queensland Dirt Modified Championship plus Compact Speedcars, Legend Cars, Stockcars, Microsprints and Open Sedans