No place like home: British Talent Team ready for a battle in Britain

No place like home: British Talent Team ready for a battle in Britain 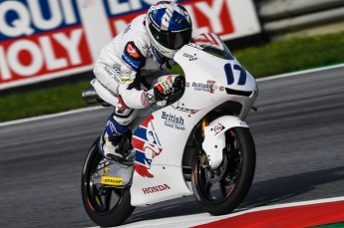 There’s always something special about a home race for rider and team, and the British GP is just that for John McPhee and the whole BTT. Arriving from an early end to the Austrian GP when the Brit was collected in an incident at Turn 1, the mission is to bounce back in front of the home crowd.

Silverstone is a behemoth of a track for Moto3™, with 3.67 miles of asphalt winding through 18 corners in the Northamptonshire countryside. There are eight left- and ten right-handers, with Copse corner designated Turn 1 for the MotoGP™ paddock; the start-finish line on the National Pit Straight.

McPhee is ready for the challenge. After the disappointment on race day in Spielberg, Monday had already turned the page as the Scot completed a positive day of testing at the venue – with great lap times and lots to be optimistic about for Silverstone, where he believes the Honda will work well.

McPhee also has a solid scoring record his home track, including points on his first ride at the venue in the 125cc World Championship in 2011 and a top six finish in 2015. The stage is set, now all there is left to do is wait for the curtains to go up.

Practice begins at 9:00 local time for Moto3™ on Friday morning, but the schedule gets a shake up on Sunday for race day. The lightweight class line up for 17 laps – a good omen – at 12:40 on Sunday. And in the UK, local time is GMT +1, or British Summer Time.

John McPhee: “I’m really excited to race in front of the home crowd this weekend at Silverstone. I made a good step in Austria, and then another small step in the Monday test, so I’m excited to get back on track. The weather will be a big factor this weekend but either way I’m feeling strong and ready to race.”

Jeremy McWilliams, British Talent Scout: “We are all anticipating a good home race for John and the team! The support from the British fans has been incredible all year long, and I’m sure that will add something extra to an already incredible atmosphere at Silverstone. Racing at home always gives the rider that extra little boost and we’re all looking forward to the weekend.”