Nitro Voodoo is prepped and primed for Winternationals glory

Nitro Voodoo is prepped and primed for Winternationals glory 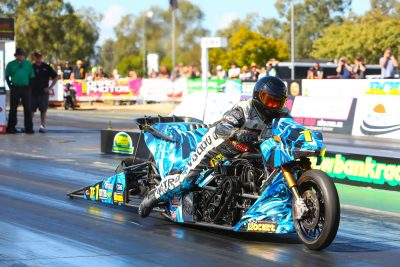 The lead up to the Gulf Western Oil 51st Winternationals for Chris Matheson and his “Nitro Voodoo” crew has seen a concentrated effort to make things happen.

In the lead up to the Winternationals Warm Up, Matheson switched off his phone and focused on the preparation needed to get his bike into the five-second zone.

“The time has come for us to take our program up a notch. The Winternationals is the final event of the 2017/18 400 Thunder season and we would like nothing better than to come out with a win and break into the fives,” said Matheson.

“The increments recorded over the past few outings have shown we’re on the right track and heading in the right direction.

With up to 12 runs on the table between the Winter Warm Up and the Winternationals, it was important for the “Nitro Voodoo” crew to have our equipment and preparation locked and loaded.

“We’re all excited about what’s around the corner so the mood is electric,” said Matheson. The five-second ET will happen; it’s just a matter of when.

“Prior to the Winter Warm Up, I said to the boys I feel something special is going to happen”, said Matheson.

“Having had the weekend prior was important for us to get a head start on the Winternationals. With three runs each day, it would hopefully give us the data and momentum we’re chasing.

“We knew the track would be prepped and tight, and the weather was forecasted to be fine. Our new traction meter was telling us the left lane was the pick.

“Our first pass smoked the tyre early while on the second attempt we got to about half track before spinning the tyre,” said Matheson. “Our last run saw more tyre smoke, just a bit further.

“To be honest we were a little disappointed, but tomorrow is another day,” said Matheson. We’re not here to fumble around so we’ll put in a new clutch and flywheel, make some adjustments and go out again and try to go further and quicker.”

On Sunday the team returned for another shot.

“It was a better day for us,” said Matheson. We ended up getting back into the 0’s in the 60 foot after a couple of runs. The first smoked the tyre, while the second pass saw the bike get to about half-track, and break a primary belt. Thankfully we had no damage and returned for the final run. Unfortunately, the bike got a bit out of shape so I buttoned it off, however, the increments were good.”

Despite not reaching the level Matheson and crew had hoped for, the vibe is good.

“It would have been better if we could have made a few full passes, but at the end of the day, it’s given us a good baseline for Friday’s qualifying at the Gulf Western Oil Winternationals, especially as the track gets more rubber down and tightens up,” finished Matheson.