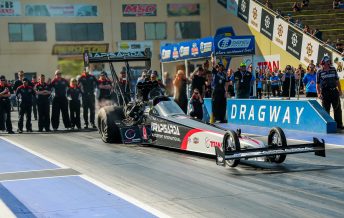 One of the most historic days of Australian Drag Racing is in the record books – now overflowing with new standards from the 2017 Gulf Western Oil Nitro Thunder.

The re-surfaced racetrack at Sydney Dragway showed glimpses of promise on day one, but after a full day of racing it showed that it is a world class surface with Australian records and personal bests tumbling across the board.

Top Fuel was a highlight, punctuated by the most number of 4.5 passes ever recorded in one day. Aussie born US based Superstar Richie Crampton showed that the new car debuted this weekend by Lamattina Top Fuel Racing was working well, with a 4.538 in the second round of racing – only two hundredths of a second from the Sydney Dragway Track Record and three hundredths away from the quickest pass in History.

The Top Fuel Final featured points leader Wayne Newby taking on Crampton, and whilst expectations were high a tyre smoking peddle-fest saw the New South Welshman driving for Rapisarda Autosport International take the win, and in the process extend his points lead.

Pro Alcohol saw a rash of 5.4 second passes in the all funny-car field. Steve Reed opened proceedings with a 5.45, his first ever foray in to the 5.4 second zone. Points leader Gary Phillips bested the mark with a 5.44 in the 3rd round of racing, however it was Wayne Price and Reed that would do battle for the Gold Christmas Tree Trophy. Steve Reed was first off the start line and first to the finish to take the win, his second in succession, however Wayne Price suffered a considerable engine explosion and ensuing fire.

Pro Slammer was a category that was lowering records across the board. It began with Reigning Champ John Zappia laying down a 5.63 – the quickest ever run by a Pro Slammer in history – but was punctuated by a side by side pass in the 3rd round of racing that was the quickest side by side run in history between Zappia and Ben Bray – the latter winning the race a 5.700 beating a quicker 5.658 on a holeshot. The final round came down to two cagey veterans, with Gary Phillips taking with win with a spectacular 5.722 over Victor Bray, featuring in his second consecutive final round in Sydney.

Top Bike saw the quickest ever run by a Nitro fuelled Harley Davidson at Sydney Dragway when Damian Muscat from North Queensland went 6.343 – only 2 hundredths of a second away from the quickest run in Australian history. Chris Matheson was keeping pace all weekend long however spun the tyre hard in the final round, handing the win to Damian Muscat.

Pro Stock was a family affair, as Aaron Tremayne triumphed over his brother Aaron in the Final round with a 6.903 to a 6.962- again, one of the quickest side by side runs in history. In the process, he wrapped up the 400 Thunder Pro Stock Championship in what was a dream debut for new Sponsors Mega Bulk Fuels.

Pro Bike also saw the record books be tossed out the window, with the quickest run in the categories history – a 7 .056 by Brad Lemberg in the final round that was one half of the quickest side by side pass, with reigning champion Glenn Wooster recording a 7.259 in a valiant runner up effort.

There remains only one round of the 400 Thunder Championship to run, the Gulf Western Oil 50th Winternationals on June 8-11 at Willowbank raceway. With the record setting performances of this weekend in the books, the focus will now shift to the championship decider which promises to bea stellar conclusion to season 2 of 400 Thunder.