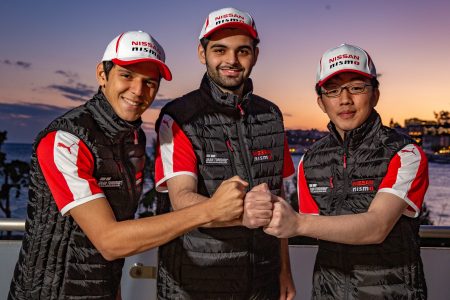 Nissan’s team in the FIA certified GT Sport Manufacturer’s Cup had a heartbreaking finish at the Monaco World Finals.

The Nissan team were the red-hot favorites going into the eracing World final as their three drivers were the regional Champions of the FIA GT Sport Nations Cup competition. Brazilian Igor Fraga won the Americas region, Ryota Kokubun in Asia and Mikail Hizal took the Europe/Middle East/Africa region.

The three combined for a seven-lap endurance race driving the Sony PlayStation version of the Nissan GT-R GT3 around the Nordschleife.

Inaugural Nissan GT Academy winner Lucas Ordonez was on-site in Monaco as an expert commentator on the event live stream.

“Nissan had the best line-up with the regional champions from the three regions but the guys made a tactical error in qualifying by not pitting for new tires and they started seventh,” Ordonez said.

“The three guys did really well in the race and were fighting for second place at the finish but ran out of fuel about 500 meters from the finish line.

“It was a such a shame because they had great pace in the race and I’m sure Nissan will be very strong again in next year’s championship.”

While team Nissan did not take home a trophy, the individual drivers starred in the Nation’s Cup competition on Sunday with Fraga taking the overall championship ahead of Hizal.

Fraga, Hizal, as well as Asian region Nissan runner-up Yuta Oishi and Nissan GT Sport Cup European final winner Patrick Blazsan are all headed to the 2018 NISMO Festival in two weeks as guests of Nissan to reward them for their efforts in the inaugural World GT Sport Championships.

The four gamers will be on-site to see Nissan’s Formula E car make its Japanese debut on home soil and will also visit the home of Polyphony Digital – the creator’s of the PlayStation Gran Turismo game.

The Nissan GT-R NISMO GT3 did battle on the streets of Macau last weekend but the season is not over for 2018 with the KCMG team set to contest the FIA GT Nations Cup in Bahrain.

Each entry for the Bahrain event will represent a different country.

KCMG will fly the flag for Hong Kong with Shiu Cheong Charles Kwan and Cheuk Wai Andy Yan selected as drivers. 18 different cars and countries will be on the grid at the Bahrain event.

Both of KCMG’s Hong Kong drivers were also on hand in neighboring Macau last weekend to see Tsugio Matsuda, Alex Imperatori and Oliver Jarvis do battle in the World Cup event.

Nissan Motorsport will race with special pink liveries on all four of their Nissan Altimas in support of Breast Cancer Network Australia (BCNA) in the 2018 Supercars finale this weekend.

As well as changing the appearance of their race cars for the Newcastle street circuit, Rick Kelly and Simona De Silvestro will wear pink BCNA race suits that will be auctioned off at the end of the Newcastle race weekend to raise money for the charity.

The organization aims to ensure that everyone with the disease receives the best support, information, treatment and care appropriate to their needs.

“I’ve never raced a pink car before, and I’m really glad that I will get to do that for Breast Cancer Network Australia at Newcastle,” said Rick Kelly.

“I’ve seen the statistics, and you read about the breast cancer tragedies that happen every day. As a race team, we thought that we had to do something to help support BCNA, and I’m so glad that we are doing it next weekend across the entire Team.

“Our Nissan cars were really fast at Newcastle last year. We almost got on the podium, so our aim is to finish the year on the highest possible note and give the BCNA and our sponsors a result that they will truly be proud of.”

The team will be looking for a good result to finish out the season on the seaside street circuit, with Kelly, in particular, hoping to solidify his position in the top 10 of the championship. He currently sits ninth and scored a pair of top tens in Newcastle last year.

Michael Caruso also scored a top ten last year in the series’ first visit to Newcastle, while Simona De Silvestro will be looking to improve upon her results in her second trip to the circuit.

Andre Heimgartner will be making his first visit to Newcastle.