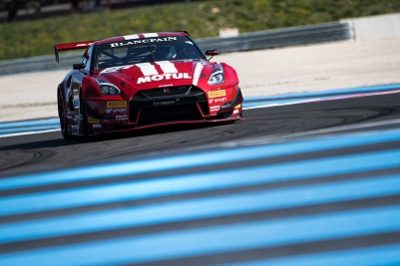 GT Sport Motul Team RJN has its sights set on replicating Nissan’s impressive GT-R performances in the South of France when the Blancpain GT Series Endurance Cup heads to Circuit Paul Ricard for the annual 1000km battle this weekend.

The Le Castellet circuit has been a happy hunting ground for Nissan in recent years with the Nissan GT-R NISMO GT3 finishing fifth in the past two years in a row.

Nissan scored its first overall GT3 Blancpain victory here in 2015 and also triumphed in the GT1 World Championship back in 2011 with a pair of race wins.

GT Sport Motul Team RJN enter the third round of the championship after showing strong pace at Silverstone. The No. 23 2018-spec Nissan GT-R NISMO GT3 of Lucas Ordóñez, Alex Buncombe and Matt Parry fought back from a qualifying penalty to finish 16th after starting 48th.

The No. 22 Silver Cup entry of Struan Moore, Ricardo Sanchez and Jordan Witt scored their first podium of the season with a third-place finish in the class.

“The Nissan GT-R NISMO GT3 has proven its pace here at Paul Ricard in the past, and we’ll be racing the 2018-spec car here for the first time – it will be interesting to see how it compares to the older car,” Buncombe said.

“We’ve shown good pace in the first two rounds of the season, but we’ve been pretty unlucky both at Monza and Silverstone.”

The Paul Ricard 1000km is the second longest race of the season and first where teams will also do battle after sunset.

“We’re very excited about Paul Ricard as this has been a great track for us in the past and they have resurfaced the track which should help tire wear,” Ordóñez said.

“We’re looking forward to a perfect weekend. The Blancpain Championship is so competitive that you can’t put a foot wrong at all – Q1, Q2 and Q3 – you need to maximise every session to grab a top 10 qualifying spot and be in contention for a podium.

“This is the first long race of the year, and we’re finishing in the night which I absolutely love – I can’t wait to get things started.”

Practice and pre-qualifying will be held on Friday with qualifying scheduled for 9:40 am local time. The 1000km race goes green at 5:45 pm CET.

Prototype battles loom on both sides of the Atlantic

The ByKolles LMP1 team will head to Le Mans for the annual test day – the team’s only chance to sample the Circuit de la Sarthe before the 24 Hours of Le Mans on June 16-17.

Driven by Oliver Webb, Dominik Kraihamer and Tom Dillmann, the team enter this Sunday’s test day after finishing fourth in the opening round of the 2018/19 FIA WEC Super Season at Spa-Francorchamps.

The IMSA WeatherTech SportsCar Championship heads to Detroit’s Belle Isle street circuit this weekend with the ESM team looking to bounce back.

After taking victory at the 12 Hours of Sebring and scoring the runner-up position at Long Beach, the Nissan-powered ESM team battled to complete a ninth and 10th place finish for their two cars at the last round at the Mid-Ohio Sports Car Course.

Last year in Detroit, a late-race fuel stop took the No. 22 ESM machine out of contention for a podium.This weekend will the first chance for ESM’s Pipo Derani to try the Belle Isle circuit – the Brazilian joining the team on a full-time basis at Watkins Glen last year.

“Detroit will be the last track on the IMSA calendar that I haven’t race at before,” Derani said.

“I have always liked street circuits and the extra challenges they bring to the game. We’ll be looking forward and working hard to come back to the front of the grid after an up and down beginning to our season.”

The Detroit race is scheduled for Saturday, June 2 starting at 12:40 pm local time.

Nissan Micra Cup ready for Round Two at Calabogie

The Nissan Micra Cup returns to Calabogie Motorsports Park for the first time since 2016 for the second round of the 2018 championship.

Located just over 100km from Canada’s capital city, Ottawa, Calabogie staged the opening round of the 2016 season.

While Micra Cup front-runners Kevin King and Xavier Coupal took the race wins that weekend, the Calabogie round showcased the durability, strength and safety of the Micra Cup race car with a spectacular multi-car crash on the opening lap. Fortunately, every driver was able to walk away without any significant injuries.

King enters this weekend’s round with a victory already under his belt – winning the opening race at Canadian Tire Motorsport Park.

2015 and 2017 series champion Olivier Bédard again leads the points after the opening round after finishing second and first in the two races at Canadian Tire Motorsport Park.