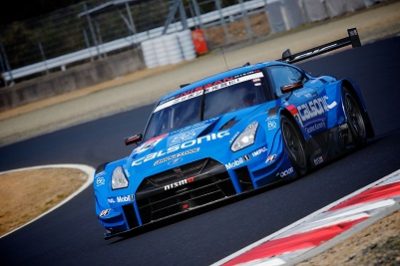 Fuji International Speedway, Japan – Nissan has its sights set on a strong Super GT season ahead after completing testing in preparation for the opening round of the championship in two week’s time.

Preparing for his first full GT500 season, Takaboshi topped the times on the opening day of the test for Kondo Racing. He set a time of 1:28.055 aboard the Nissan GT-R NISMO GT500 he shares with JP de Oliveira.

Mardenborough set the GT-R pace on Sunday with a lap of 1:29.409 to be fourth fastest overall ahead of de Oliveira/Takaboshi (4th), Quintarelli/Matsuda (7th) and Motoyama/Chiyo (9th)

“It’s a big improvement over last year’s car and after every test we’ve come away knowing what tyres we want to run from Bridgestone.

“Our speed has been really strong and we’ve been towards the top of the timesheets in the past couple of weeks.

“I’m really hyped for round one in two weeks and can’t wait to get to Okayama. I feel really good about the season ahead.”

The opening round of the 2018 Super GT Championship will be held at the Okayama International Circuit on April 7-8.

Top ten for Nissan Motorsport at the Australian Grand Prix

Caruso continued his run of strong qualifying results to start the final race of the second round of the championship from eighth on the grid. Caruso reached the flag after several on-track battles, equalling his best result for 2018.

“I think overall we had good car speed despite the end result not being what we wanted,” Caruso said.

“We’re further forward than we were in Adelaide, so we’ll aim to keep that up.

“I’m looking forward to heading to Tasmania next. Symmons Plains is a well-supported event by the locals, so hopefully, we can put on a good show.”

The newcomer to the team, Andre Heimgartner, finished a tough weekend with a season-best 14th in the No. 7 Altima entry.

The weekend threw everything at the Nissan newcomer, with Heimgartner showing great maturity to make a number of exciting overtakes in challenging conditions in only his second round driving the Nissan Altima.

“I think I’ve done more passing this weekend than I have in my whole career,” he said. “So, there are plenty of positives to take away.

“It’s good to learn where the car’s strengths are on certain tracks.”

Simona De Silvestro scored a 16th place finish in the final race, her highest of the weekend while Rick Kelly was collected in an early accident during the race. His best result was a 13th in race two.

The Virgin Australia Supercars Championship heads to Symmons Plains in Tasmania for the next round on April 6-8.

Vesko Kozarov dominated the weekend aboard the No. 3 Reardon Racing 370Z – winning on both Saturday and Sunday.

“It was a very good weekend with two wins with our Nissan 370Z,” said Kozarov.

“In the second race, I was glad to see the No. 97 370Z of Tony Rivera fighting with the BMW as it gave me a little gap to manage my tires.”

Kozarov qualified on pole for both races with Nissan filling the top three positions on the grid for Sunday’s race.

The Pirelli World Challenge TC class returns to the track next month at Virginia International Raceway on April 27-29.