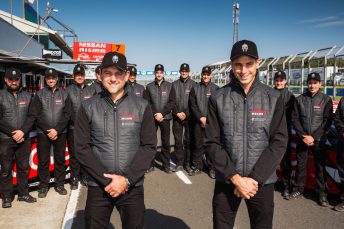 The 60-strong Nissan Motorsport team will be decked out in the latest advancements in apparel technology at the team’s workshop and all events in the Virgin Australia Supercars Championship.

“The whole team is very excited to be working with Industrial Athlete,” said Nissan Motorsport team co-owner Rick Kelly. “Their apparel has proven to offer great performance. In motorsport we don’t normally get to associate high performance with comfort, so it’s great to work with a partner that can supply apparel that combines comfort, performance, functionality and safety.”

Industrial Athlete is the latest division of Australian Defence Apparel (ADA). Inspired by 100 years of protecting soldiers on the battlefield, Industrial Athlete represents the innovative hybrid of Workwear Apparel and a modern soldier Combat Uniform.

“We are both highly motivated companies that put a great focus on the design and development process,” continued Kelly. “It’s very exciting when you’re working with a partner that speaks the same language. Industrial Athlete is at the forefront of Apparel technology including the use of patented fabric, so straight away we could see their approach was pretty unique and aligned with our vision.”

Based in Thomastown and with a manufacturing facility in Bendigo, ADA began as a government owned business in 1912 responsible for the manufacture of uniforms to Australia’s fighting forces. ADA now employs 250 people, and is the nation’s biggest manufacturer of customised Military garments and protective equipment.

For Team Manager Scott Sinclair, the announcement provides the Nissan Motorsport crew with high performance apparel for both the racetrack and the workshop.

“Across a race weekend our crew can find themselves in all sorts of situations, whether it be under cars or amongst the elements; so to have a uniform that works well in this environment is a huge achievement,” said Sinclair.

“We have a team of over 40 people at the racetrack ranging from areas like mechanics, engineers and truck drivers, so the crew are good at discovering if something isn’t up to the job. Here we’ve found a partner that can supply uniforms that will cover our needs at the track and back at the workshop. For us, the racetrack is our battleground.”

CEO of ADA, Matt Graham said that to be able to supply the Nissan Motorsport team with what he knows is the absolute best in workwear apparel is a great win for them.

“The partnership is a great fit for us and one that we see as a critical part of an effective launch of the Industrial Athlete brand into the Australian market. We’re confident that the motorsport community will not only see a well dressed Nissan Motorsport team but they’ll also recognise how functional and ready for the job the Industrial Athlete gear is.”

The team is also excited to reveal that Industrial Athlete Ambassador, Corporal  Dan Keighran, VC, will be joining the team for the Darwin TripleCrown weekend. On 24 August 2010, during his second Afghanistan deployment, Corporal Keighran was part of an Afghan and Australian fighting patrol engaged by a numerically superior enemy force, and for his actions on this day, Corporal Keighran was subsequently awarded the Victoria Cross for Australia.